This evening we couldn't find the kittens.  Searched the house top to bottom and then again. Called their names but didn't hear a peep in return. So we went to the gym to give them a chance to consider life without the rest of their pack around.  After we got back Cate opened a drawer then started giggling. 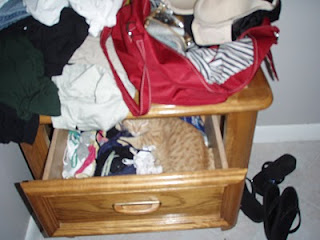 The picture shows where they had been hiding, in a closed drawer in the night stand!  The little guys had crawled under the front edge then up between the drawers and the side to lay down in the top drawer.  Quite an impressive feat for the critters!
Posted by Mike at 8:09 PM No comments:

(Last updated January 25, 2010)
Cate and I are cat people. The last cat I had was Pumpkin, an orange (obviously) DSH, who sailed from San Francisco to Tampa on Horizon. He went to what passes for kitty nautical heaven in 2004. Cate had a cat named Checkers, a calico DSH who was 17 years old and had helped Cate raise 3 kids. Checkers developed spinal problems and passed on in November 2009.

During Checker's final days, we noticed a feral cat with a litter of tiny kittens seemed to have adopted the back yard. Being suckers, we decided to help momma out and began leaving out food and water for her. Momma quickly got the hint and would come by several times a day with brood in tow to fill up her belly before nursing the little ones. Soon the kittens would help themselves to any food momma left. Momma is a small calico with bright green eyes, shy around humans but more than willing to share space so long as they stay at least 10 feet away. There are 5 kittens: 3 orange, a black runt, and a longer haired calico I called fluffy because her mane looked so much like a lion's.

The feral cat population in the neighborhood is huge. We decided to be proactive and catch momma cat and as many of her brood as we could and have them spay/neutered. The kittens looked so cute that we also decided we would try to adopt a couple of them.

Saturday January 2nd 2010 - We went to Animal Coalition of Tampa (ACT) and picked up four traps in the early morning. We baited the traps and set them out. Within an hour we had momma cat . . . but she was not happy . . . I think you could say she was spitting mad! We took her in and leaving her in the trap, gave her food and water. Over the next several hours we caught 2 big orange tom cats and a smaller female that looked to be someone's pet, but released them all because we had hopes of getting kittens.

By the end of the first day we had 3 kittens in two more traps. There were two orange kittens and the black runt. Oddly, the runt and one orange kitten were caught in the same trap! The only ones we had not caught were the last orange and my favorite, fluffy.

The next day we tried again but had no luck. Our house must have become known in cat circles as the death cat house and we did not even see a cat, let alone catch any. 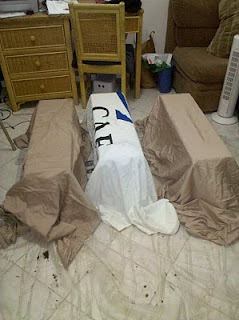 Monday January 4th - We got the cats to ACT early in the morning and picked them up that afternoon. We decided to try to tame and keep the two kittens that were caught in the same trap. On the paperwork we named them Duff and Blathers after the two inept cops in the story Oliver Twist. After the vet kindly sexed them for us, we substituted new names; the black runt is now Rose and her orange companion is Oliver. We set up those kittens in the closet with a pet carrier for a lair, a litter box, and food and water bowls. Momma and the single orange kitten were left in their traps. The orange kitten soon acquired the name Boca, which means mouth in Spanish, because of his vocal demonstrations of resentment of captivity! How such a tiny body can generate such a huge warbling sound is impressive! The nice folks at ACT told us to keep the cats at least overnight before letting them loose to help them recover from surgery. A cold wave hit Florida about then so we decided to keep them for an extra night so they could heal more before facing the cold.

Wednesday January 6th - Momma cat and Boca were set free to make their way in the wilderness world of my back yard. Hey! We do have possums and raccoons 'round here! LOL

Within hours the remainder of the brood was once again establishing its presence in the back yard.  Even the two kittens that were uncaptured reappeared for their reunion with momma.  But none of them would come anywhere near the back porch for food we left for them.  We will see if they overcome their trepidation later.


Kittens week two
Tuesday January 12th - Momma cat and Boca have been free for 5 days and last night they finally returned to our porch for a hand-out!  It has been extremely cold and we figure momma needed some quality time to heal.  When they showed up, momma bellied up to the food bowl while Boca frolicked and rolled in the yard just outside.  They looked so cute!  Fluffy has also reappeared and has been supplementing her meals at our house for the past couple days.  We are debating keeping a trap for her (him?), but for now we are kind of overwhelmed by this wild game trapping experience.

Rose and Oliver are doing great!  Cate's son Eoin has recent experience in dealing with feral kittens so we are relying on him heavily.  He helped us set up a cage habitat for them in the living room where they can feel safe but can start to integrate with the indigenous human pack. 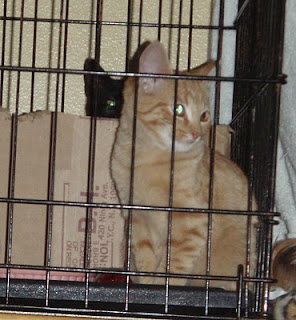 Last night Cate and I held the two kittens but carefully wrapped in towels.  Neither kitten seemed to mind a human finger rubbing the back of the neck so we feel better about the process.  We still want to just pick them up and hug and pet them, but it is too early in the taming process.  Oliver has begun to express himself a bit more vocally.  Rose is content to use him as the front kitten and seems purrfectly content to let him take the brunt of any attack while she sits behind and waits an opening.  Females can be sly :) 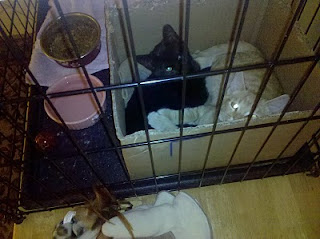 We intend to take the kittens out at least once each day but have to resist the urge for direct contact until we know they will be comfortable being petted.

More as we progress.


Kittens week three
Tuesday January 19th - We wanted to post some more pictures before we got too far along: 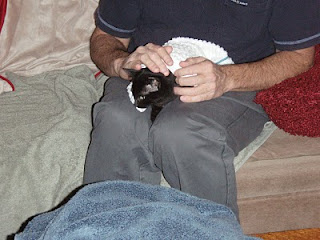 Rose, of course, is the black kitty.  Oliver has become a little more camera shy. 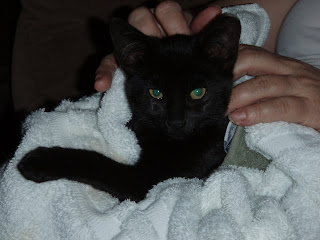 Then there is fluffy, the one that "got away" and missed the fun of being neutered! We will probably let Rose and Oliver out of the cage this evening and see what happens.  Fingers and toes crossed!

We did get them out for a spin around the place.  Rose is going to be a real lap kitty I think.  I didn't use the towel this time, just reached in and plucked her out of the cage.  She seemed very content in my lap and her paws even started kneading slightly while I petted her.  I am still not sure if the purring was a content purr or stress purr. We have been told they sound the same but for me, the kneading makes me think she is happy.

Oliver, however, I kept in a towel while petting the back of his neck.  A couple minutes into it though he decided to bolt.  This time we didn't give chase, just let him hide behind the TV.  I put out some of the wet kitten food they love and a few minutes later he came creeping out to loot the treasure.  Shortly he decided to explore a little.  He started with the bathroom but within a minute we heard soft mews; he was in the tub and was too short to get out!  Rescued with a towel and that was it for his outside romp for the night.


Free at last!
Thursday January 21st - Rose and Oliver McHop are free to roam the house at will! We rearranged things and tried to kitten-proof as much as possible, closed all the bedroom doors then opened their cage door. About 10 minutes later a very timid but inquisitive Rose ventured out into their new realm and started exploring.  Oliver, still the shy one, waited quite a while before starting his own investigation. 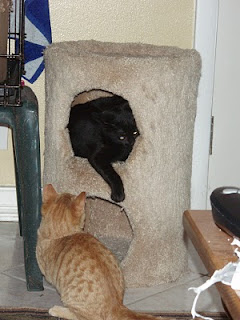 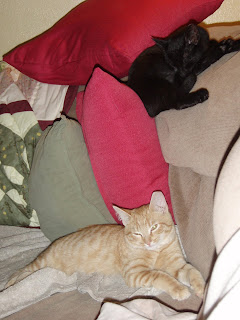 It is now two days later and the two little fellas are still pretty squirelly.  When a door opens they head for the hills (under the nearest bed or behind the couch), but they soon reappear. 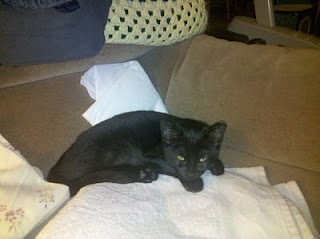 Rose has turned into a real attention hog.  She walks right up and turns on the purr machine and leaves no question that she wants a good petting! 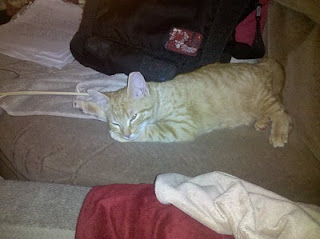 Oliver remains a bit aloof.  He purrs quickly but is still very shy of being touched.  He also is the first to run away and the last to return.

This is still very early days but we think the new additions are going to work out just fine.

Hey!  I think someone here is getting a little too comfortable! 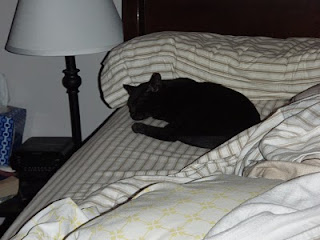 Actually, she has taken to sleeping with us at the foot of the bed. :)
Posted by Mike at 10:22 AM No comments: