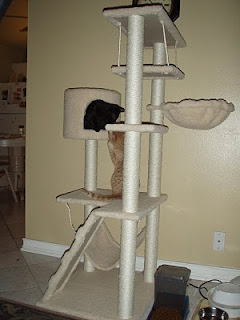 The new cat house arrived this evening and us humans had lots of help assembling it.  Within minutes they were exploring top to bottom.  No one has tried the swing yet but the hammock has been initiated.
Posted by Mike at 7:08 PM No comments:

Life in an eclectic neighborhood

Last night, or rather this morning at 1:12 to be exact, I was awakened by voices just outside the bedroom window that faces my back yard.  There were two deeper male voices and several, maybe 6 or 7, young kids voices.  I could see flashlights and hear the voices but couldn't quite make out what they were saying.  The kittens were by that point hunkered down somewhere, probably under the bed.

I dialed 911 to report the invasion and gave them my address.  They said they would send someone out.  I was nervous enough to stay low as I watched the flashlight beams play across the ceilings and walls as the people moved about in my back and side yards.  They would group, then split up and go all around the house and yard, then group again. I felt under siege and wondered if the security doors would hold up.

After maybe 10 minutes, the entourage seemed to move off down the street and I started to relax a bit.  Then at 1:36 the cops called back to say the two men were undercover cops who were looking for someone.  I asked why, if they were cops, that they were taking along a half dozen kids during their search, but got no reply.

I think I managed to fall back asleep about 5.
Posted by Mike at 11:22 AM No comments:

Don't you love metrics?  LOL  Ever since Freedom Day, Oliver has remained aloof and has been virtually untouchable.  Rose, on the other hand, has been quite the attention hog and demands a fair amount of loving from her humans.  But maybe because she was the runt and had to do so much for herself, she has problems sharing.

Over the past few weeks Oliver has watched his sister getting all the good pets.  While his purrs start almost the same instant Rose's do, he always stays more than an arm's length away.  Any time he has unknowingly strayed too close and we do reach out to him, he scrambles away and hides.

Recently Oliver has been getting much closer to us, but he still runs when we try to consummate a feline-human connection.  When laying on the couch, for example, he has a few times tucked himself up behind a bent knee.  Well, he has until Rose sees him close to "her human" and runs him off.

Last night, though, they both climbed (clawed) in bed and Oliver actually butted his nose against my hand!  When he did it again I woke enough to realize what happened and slowly moved to brush my fingers against his back.  He stiffened for a second, then turned the purr machine on full and a moment later had tucked himself up under my chin!  We didn't stay that way very long before Rose came galloping around to run off the interloper, but it is a start.
Posted by Mike at 9:48 AM 1 comment: