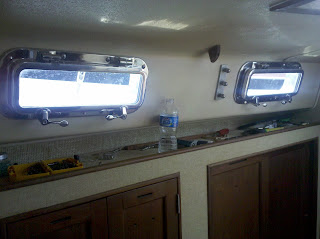 Our Morgan OI ketch is 30 years old and she was built with plastic portlights.  The decades have taken their toll and many have broken parts, some leak, and some look like they would break if we tried to open them.  At this year's Miami Boat Show the folks at New Found Metals made us an offer for new stainless steel portlights that we just could not refuse.  It was not an insignificant order, Horizon has 16 portlights, but in the end we placed the order for the 4x14 portlights, screens, template, arbor, and Butyl sealant.

The first shipment of 4 arrived in early April but it took a while to find time for the project.  We decided to start with the 4 coach top ones since we can easily get to both sides from the boat and do not have to use a dingy or work from the dock.

The videos on their web site make it look so simple; it takes them minutes to cut through the drywall panel they used for the demo, drill the holes, fair the cutout and mount the portlight.  Real life is not quite as easy though and we found that after 4 installs, each portlight still takes 4 hours working plus 1 hour cure to install.  I was lucky to get a referral for Julio, a fantastic worker we hired to help with the project.  Well, he was hired to help but he has so much more energy than I that he ends up doing the majority of the work and I help him.

A hacksaw and chisels make short work of getting the old plastic portlights out but even 30 year old 5200 can maintain a tenacious grip.  Then the template is used for drilling the screw holes and to mark for the slightly larger cutout.  We used a RotoZip to cut through the 1.5" to 2" coach top and each portlight chewed through 1 or 2 cutting bits.  Superbond Epoxy filler from Fiberglass Coatings is used to fill any voids then we wait an hour for it to cure.  After that, a little shaping and re-drilling and the hole is ready.

Next comes the fun part: the cabin sides are not parallel and an odd thickness so we have to custom cut each of the 8 through bolts for length.  The videos didn't show that step but I think we snapped one of the gussets on the inside of first trim ring before we figured that out.

We did use the Butyl sealant but found that making the smaller sealant "string" they show in the videos is NOT easy so we fudged that part a bit.  I hope that stuff holds up as well as 5200.

The new portlights are sturdy, look nice, and pass a lot more light than the old hazed plastic ones.  We now have the procedure down so the more difficult hull portlights may not be as impossible as they appear.  While we can get within reasonably easy reach of 11 of the rest, the one in the galley is arms reach.  That will be the toughest one!