All work on Horizon stopped for a few weeks while we packed up and moved the family heirlooms back to the far cold north, helped as best we could with final preparations, then were honored to attend an impressively glitch-free and most beautiful wedding for Cate's daughter Maureen and Johnny Falvella.  Congratulations!  (And you guys brew some awesome beer!) 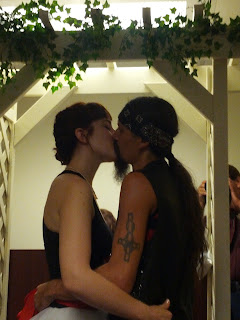 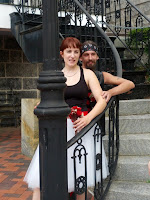 One more of the wedding party :) 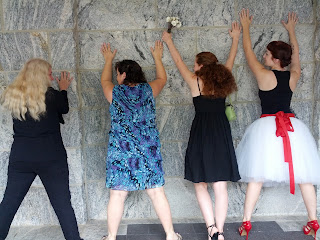 Horizon goes for a jaunt

Recovery took a week but we shook the dust off and finally got Horizon out of her slip.  The hydraulic steering worked flawlessly (though the nut behind the wheel caused some consternation) and has not leaked a drop since we topped everything up a month ago.  I think that issue can be considered a closed chapter.  We do have some new minor engine system gremlins but those we can work on at leisure.  We also started filling the diesel tank, 40 gallons each time we go out until the 120 gallon tank is topped off.  We have not yet had the tank full so if there is a leak, we will hopefully find out with smaller quantities and not be surprised by finding an entire tank full in the bilge.

When we bought Horizon, she had two aging 1.5 ton A/C units with separate compressors and evaporators.  One unit originally cooled the v-berth and main salon using a single 18,000 BTU evaporator and split air duct, but that unit never worked for us because of leaks in the long refrigerant lines.  The other unit also cooled the main salon using an 11,000 BTU evaporator and the aft cabin with a 6,000 BTU evaporator.  Although that unit worked okay, the age meant low efficiency, the circulation fans were noisy, the sea water pump ran continuously, and it just could not cool the main salon well since the thermostat was in the aft cabin.  With all the recurring cooling water problems, we recently installed a tiny window A/C unit in the aft cabin companionway for use at night, and only turned on the big A/C during the evening.  That worked great for power consumption and the limited sea water pump running time helped slow barnacle growth in the main A/C cooling filter system.

We are now in the process of replacing the dead forward A/C system with a new self-contained 16,000 BTU unit mounted in place of the old evaporator.  Our expected benefits will be quieter operation, digital temperature control in the main salon, and a sea water cooling pump that cycles with the compressor to greatly reduce barnacle growth.

With those changes we no longer need the two big A/C compressors taking up space in the engine room and since the genset has been frozen solid for who knows how many years, we are planning reuse of that entire 6' x 3' flat space behind the engine.  The current list for that area has the VM NF-200 12V water maker, the deck washdown pump, and possibly a HookaMax 12V dive compressor.  The remaining space may have captive closed shelving for tools and non-combustible spares for the engine and other systems.

We have been accumulating movies on DVD for a decade and have quite a collection of over 200 movies.  For cruising we got a LaCie ruggedized impact and water resistant 1.5TB hard drive to hold our DVD and music collections.  Of course ripping DVDs to the hard drive is mind numbing and it takes about 35 minutes per disc but doing that will save about 8 linear feet of DVD shelf space.