As a kid growing up in the suburbs of Baltimore, Moving Day was a bad boy night of pranks on or around Halloween. VW bugs were lifted and placed in new places, trashcans were “trashed”, trees toilet-papered, and windows egged. It was not a favorite among adults but it had a certain mystique for those of us not yet teens. A bit of dread, a bit of will I ever mixed with a fascination. Well . . .as a cruising First Mate at the ripe old age of 55, there is no mystique lingering in the concept of moving.

After two blissful weeks of co-habitating at Allen’s Cay with iguanas and bottom fish, my own personal aquarium and all-around wind protection---the lure of meat, lettuce and yes, the ever-
demanding egg fetish—drew me out of my newest safe zone.

Those who have traveled the Exumas will realize that a move from Allen’s Cay to Highbourne is not one of great distance or strain. Unless of course you are aboard sailing vessel Horizon. The trip itself was not eventful. But the dinghy ride to Highbourne from the anchorage was spiritually uplifting. Translate into rote repetition of the rosary in order to keep from berating the captain or cursing the water dousing or wondering if either of us had the muscle to row back to Horizon. Because the problem with the Mercury outboard’s idle, which had been noted in Nassau, became permanent. As the throttle refused to advance, the current and waves took charge while the captain fumed, fussed and generally invoked my Catholic roots without realizing it.

Five decades of the rosary later, he announced that idle was all there was, and we proceeded slowly to the marina settlement at Highbourne. Or as Mike aptly calls it, Highbrow. My spiritual routine allowed me to reflect that future ventures would include a simple dress in dry bag to slip over the now requisite bathing suit for transport.

It also allowed me to crawl from the dinghy with head in a neutral position despite my soaking shorts, wet tee shirt and sloppy Teva’s. At the marina store, we found we needed to pay $5 a person to be afoot High Brow and that allowed only access to the store and the restaurant.

But it was very worth it. When your freezer has only three portions of meatballs, two portions of shrimp and a pair of pork chops, and you find the only store for thirty miles that has meat, lettuce and eggs . . . Blessed are thou among women.

Very few things were priced. We found the receipt enlightening, $9 for lettuce, $18 for a small frozen chicken among other interesting prices. But when in Rome . . .

We treated ourselves to lunch at the Xuma Restaurant---an excellent solace for the idle situation. We had the best food we had eaten since . . . Vero Beach. Although my daughters would disagree and say Baltimore, and Worcester respectively. We enjoyed a spectacular view of the amazing blue water along with a few Bananaquit scavenging for haute cuisine crumbs.

The quality of the food justified the price. In hindsight we realized that the only truly worth it food we have experienced in the Bahamas has been at marinas. Must be the influence of the High Brows :)

The guidebook said we could dispose of the first two bags of trash for $5. It ends up it was $5 a bag. That’s when the true Spartan emerged. I finagled two bags into one.

We boarded the dinghy a bit dryer, feeling re-provisioned. A returning tide helped us idle our way back to the boat.

I have had a lot of spiritual training in my 55 years. I have spent most of my post-first marriage time skeptical of religion. Cruising has given me many opportunities to express gratitude to the God of my understanding, and returned me to habits that I never realized were ingrained. Thank you Jean Fitzpatrick and the Rosary group. The one that disowned me over nursing Bridget.

I find the best times cruising are at anchor. And yet---wait for my next installment.
Posted by Mike at 5:24 AM 1 comment:

The guidebook said “you will either love it or hate it but you want to try it once.” Long-term cruisers said “don’t leave your boat, it was once great; now it’s a ghetto.” Well let’s just say that after a month on the leeward side of Devil’s Cay, Nassau was much anticipated. Eggs, internet, lettuce-----who could ask for more?

Unfortunately, the winds were 15 knots above expected and the waves were 2-3 feet higher than predicted. We entered fast and furious. Twenty-two degrees of heel. That is about 7 degrees into hell from my perspective. Items which had never moved below before were now in the center of the main salon with a very smelly sick cat navigating flying items. The other cat was safely rooted into the hanging locker. His meow is so undeveloped, if he was howling we could not hear him over the engine. Yes, horror of horror to the true sailors----we were using the motor as well as sails. Why prolong the fires of Gehenna if there is an engine to accelerate transition to safety? As we neared the port entrance, Nassau was experiencing a squall. That meant that sails would need to be brought down in 25+ knots of wind with a smattering of rain. I was unable to do the jib alone, Mike had to assist. The guidebooks spoke poorly of the anchorage stability citing high current and a non-reliable bottom. So we were on guard for the first twelve hours or so for dragging.

But once again our CQR anchor held firm. Thus began three weeks of exploring the culture and history of Nassau. Colorful, dramatic, proud Nassau. It was a wonderful experience. Many cruisers do not feel comfortable in Nassau but we found it very pleasant. Yes, a city, and yet an island with proud natives focused on customer service. Such a shift from what we had experienced in the Abacos.

My favorite spots . . . the Museum of Art was the perfect size, had excellent exhibits and did much to fill in the Nassau story and the Bahamian experience. The distillery tour offered us the best view of Nassau and the first sign of a rooster---always a herald of island life. The Bahama Rock cafe, just outside of the Queen’s stairwell, had excellent fare and free internet. The bus was easy and showed us much more of Nassau including a mall—perfect for pre-Christmas
shopping. Auntie Ann’s was a nice reminder of home.

We had a few harbor-mates onboard for sundown one evening and another batch on Christmas day. It took the edge off of not being with family. Cruisers are inevitably unique company and share a wealth of great stories and experiences. We ended our respite in Nassau with a morning trek to town to see the annual Junkanoo celebration. It is the celebration of being Bahamian with a parade that lasts from midnight until almost noon. Ornate costumes, music, floats---all representing some aspect of being a Bahamian. I was lucky enough to have a 10 year old Bahamian commentator beside me on the fence. I agreed with her, “this was first class, not third class---but first class all the way—that’s the Bahamian way.” A city to return to someday. 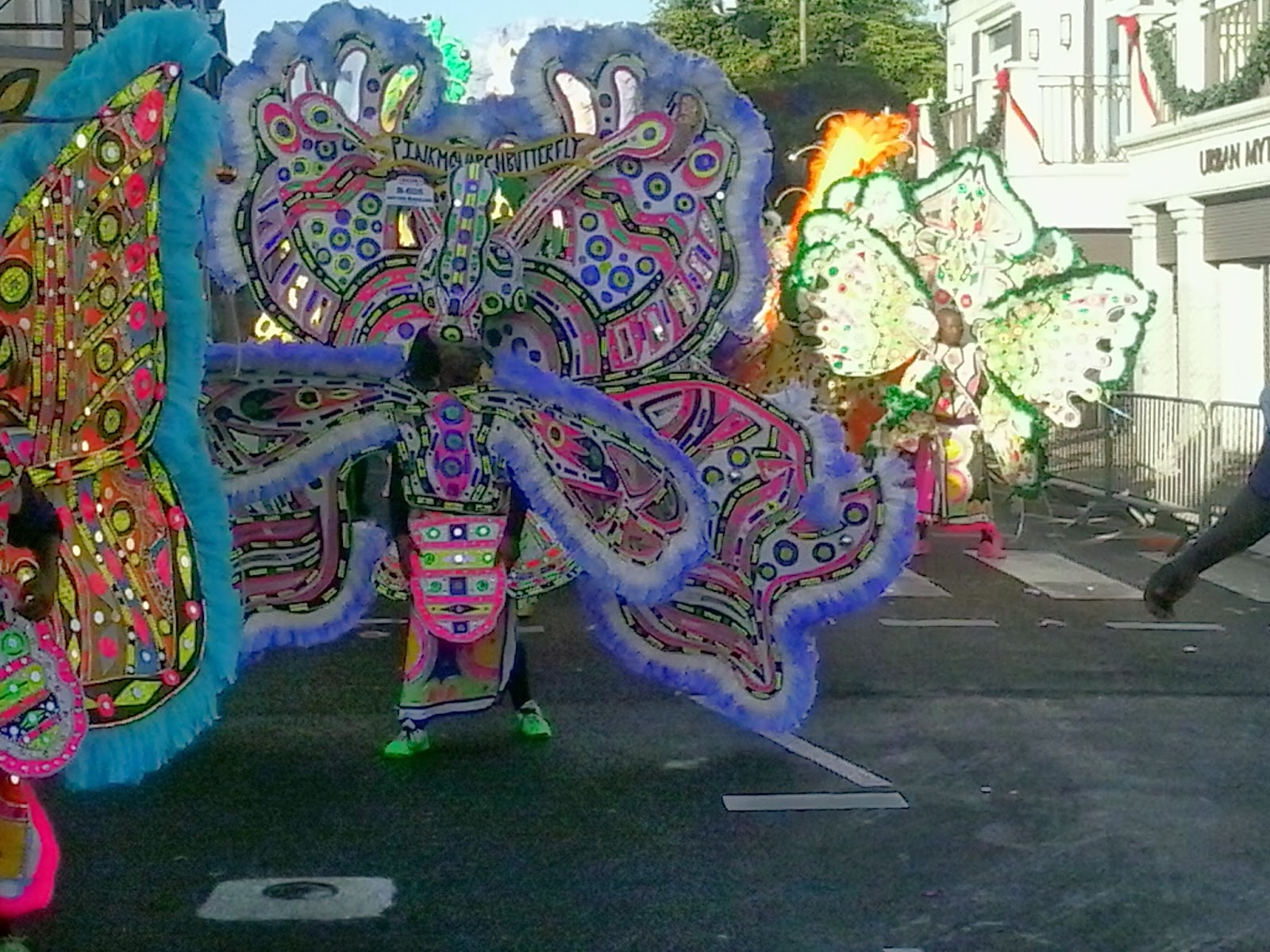 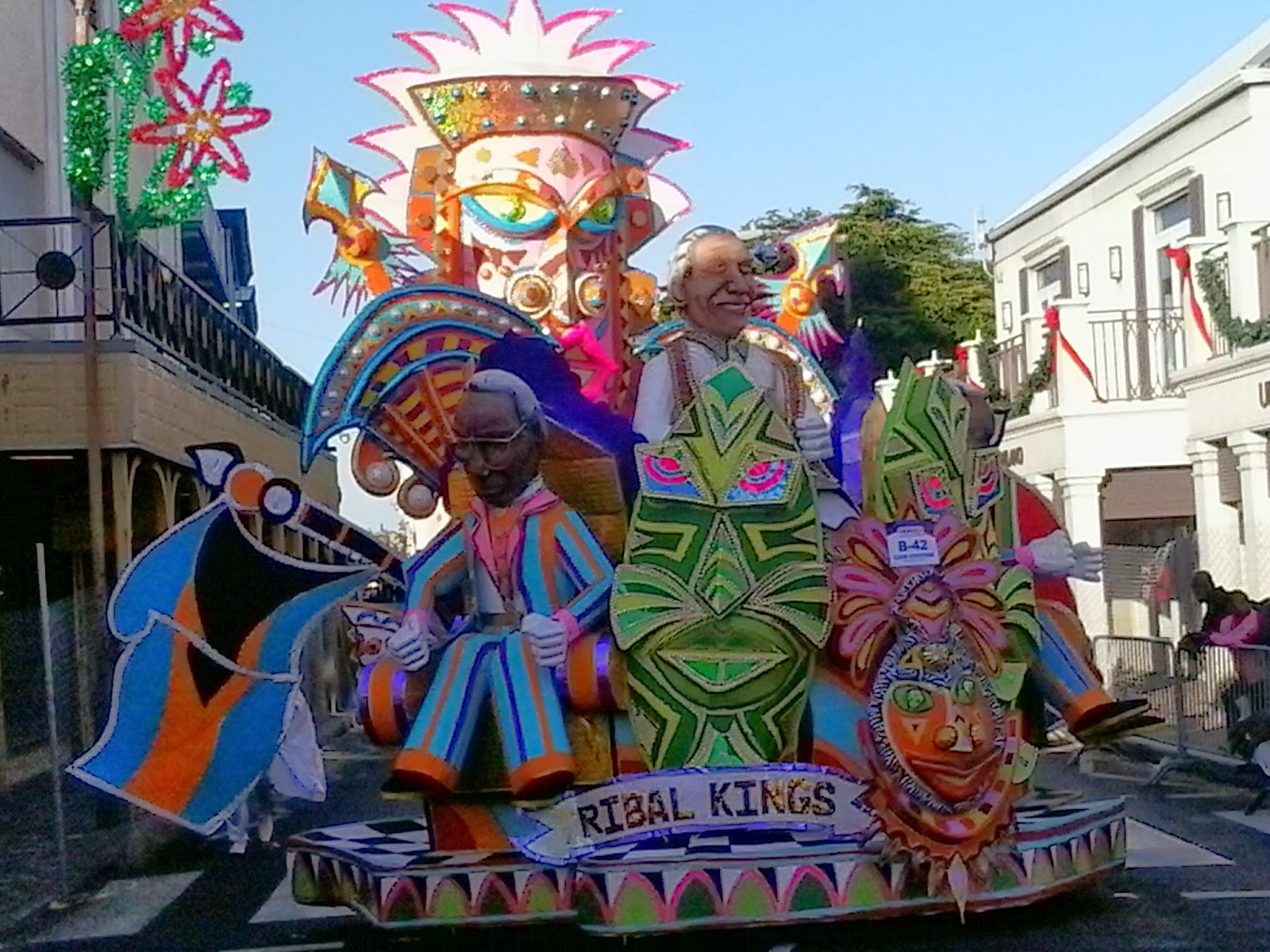 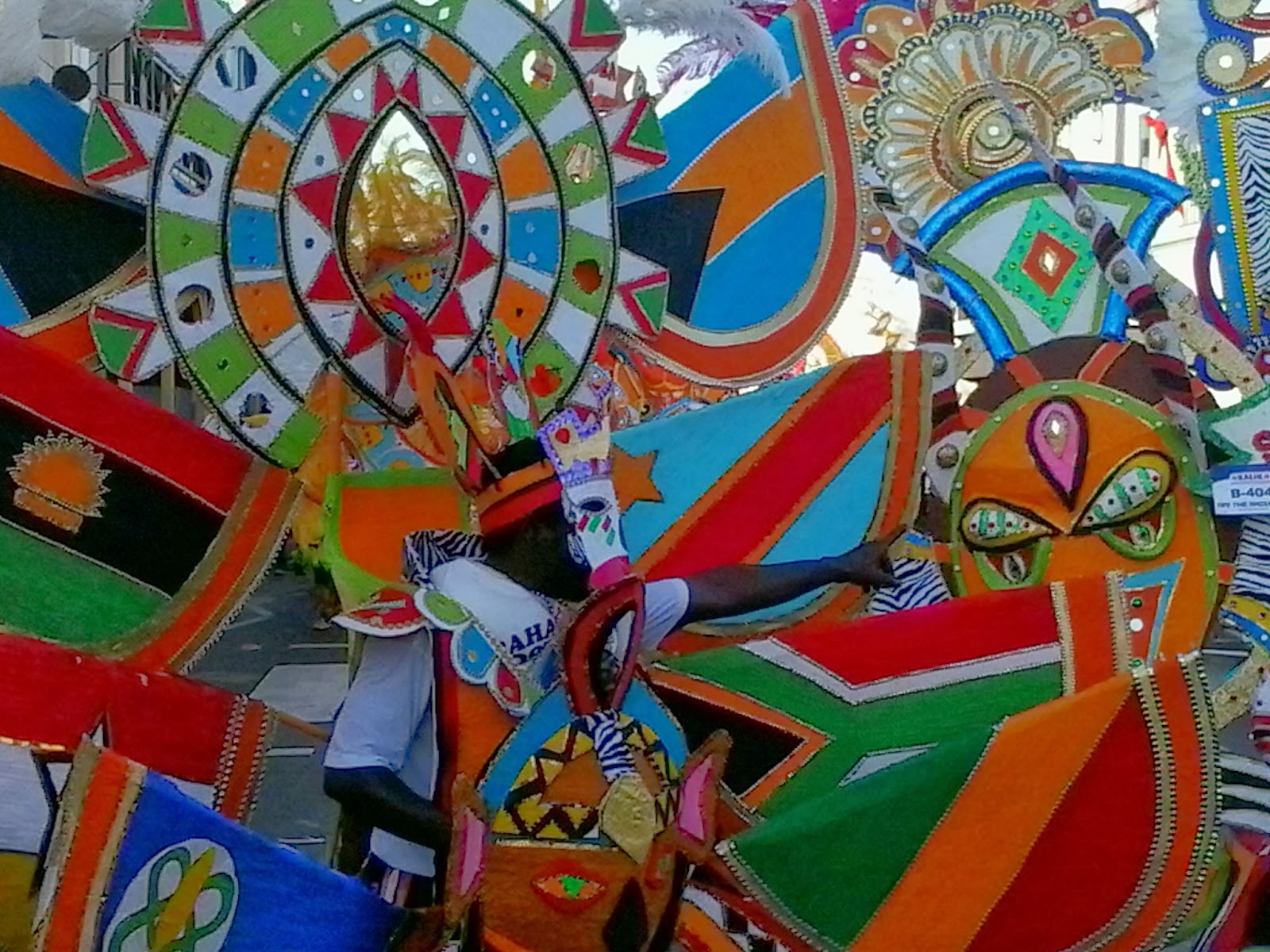 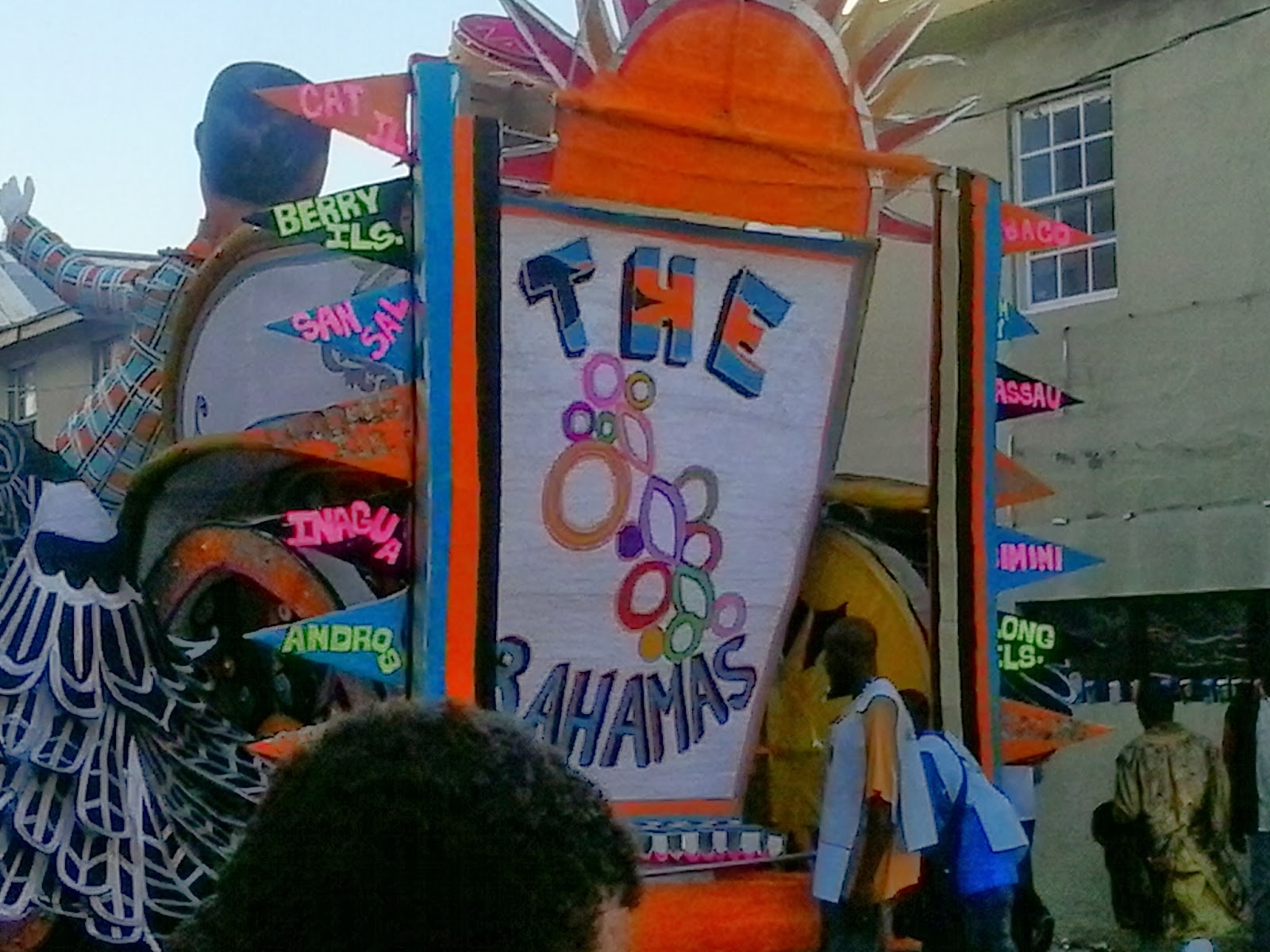 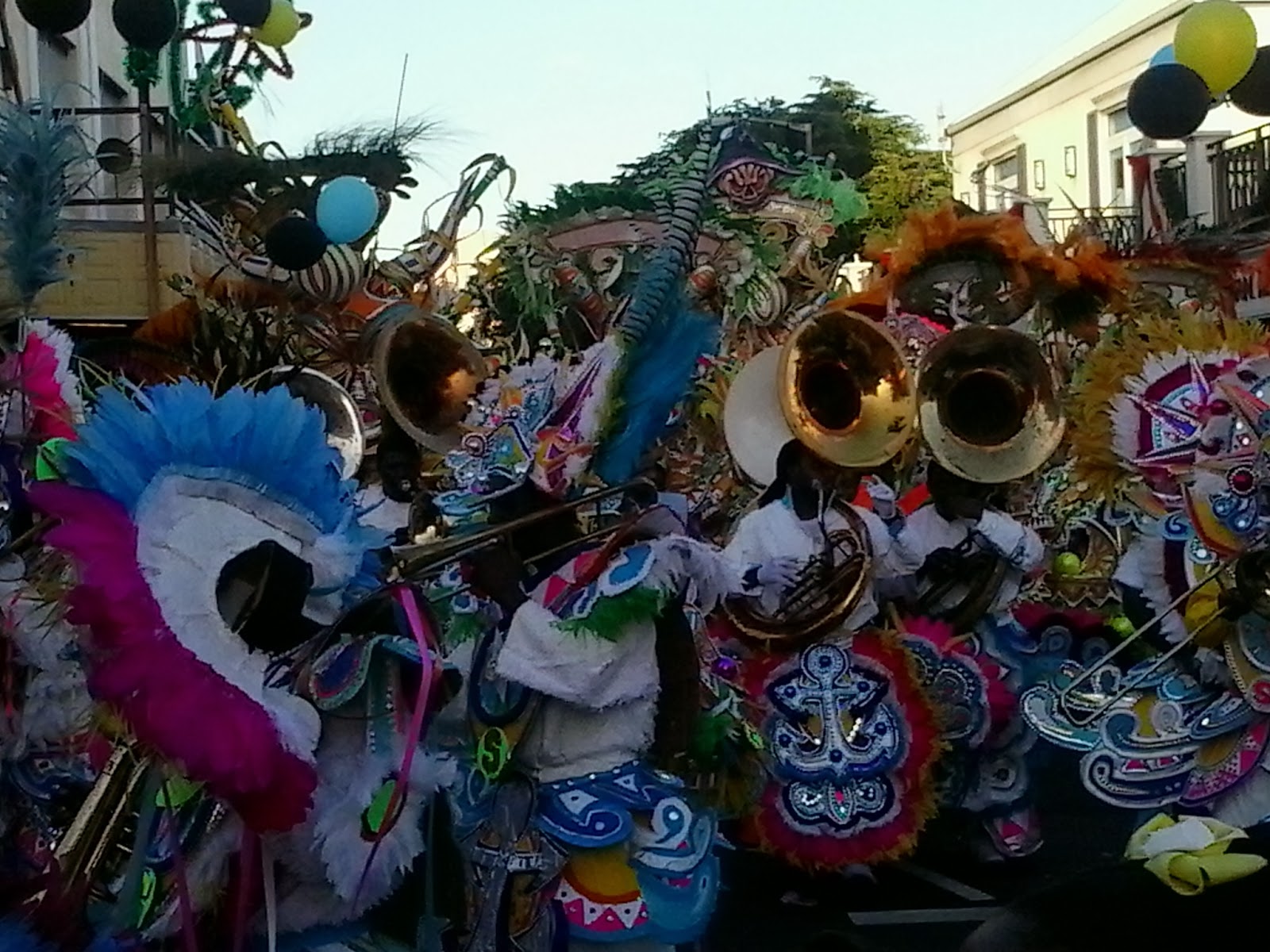 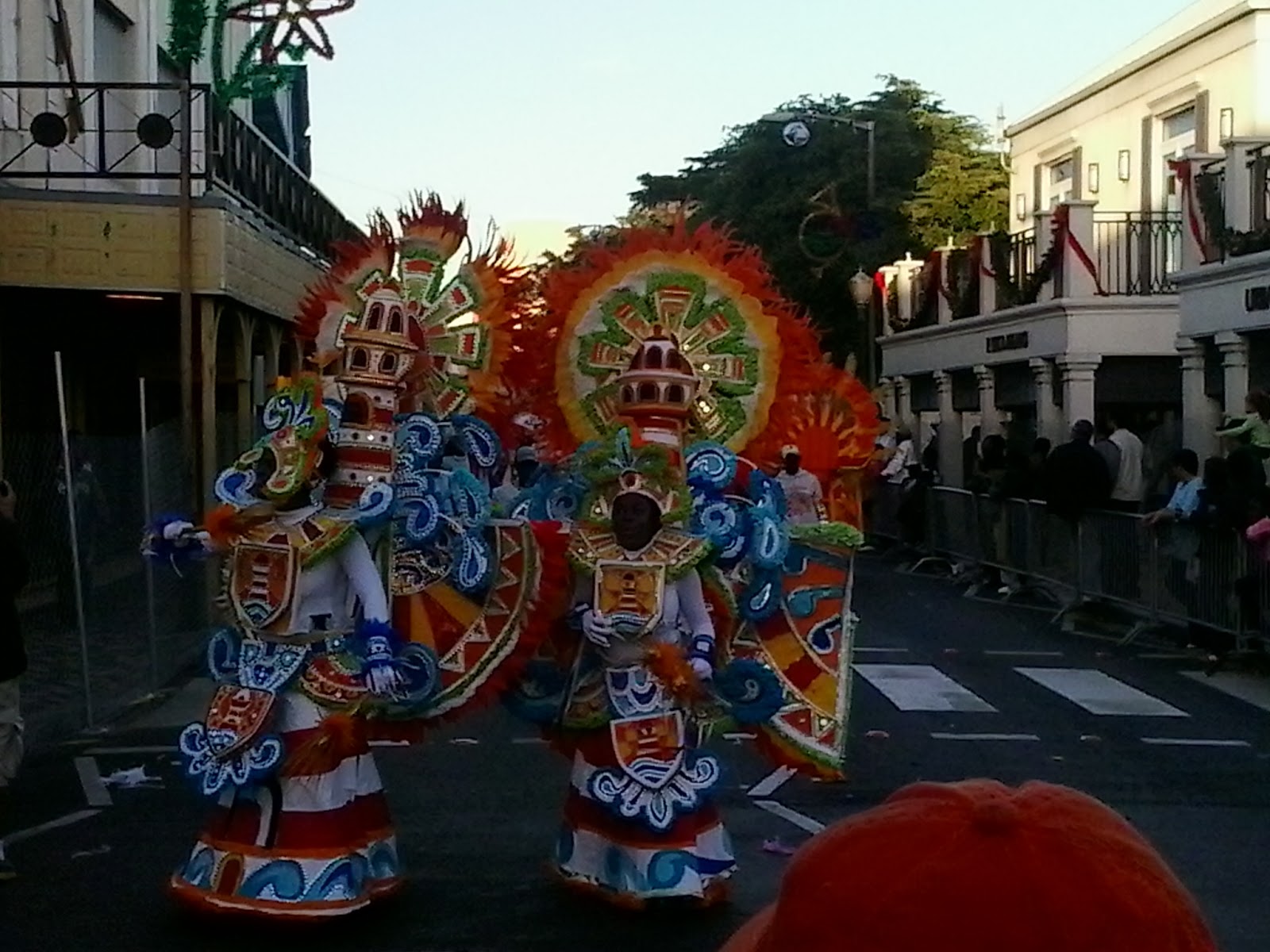