After a week retired...

Give us a week of leisure time and we can get lots done!  The kids came down to help me through my first weekend of retirement so there wouldn't be much chance for the "I am unemployed" shock to have much effect.  It sure was good to see them but I think they wish they could have stayed around a few more days to see the St. Petersburg Grand Prix right outside our marina.  Since Thursday we have been serenaded by the beautiful sound of finely tuned engines screaming around a course on the streets we drive every day.  Over the last month, the entire downtown has become increasingly disrupted with streets closed and detour signage everywhere.  Where we are, the street at the entrance to the park where the marina is located is part of the track so we have to drive in and out via the sidewalk.
﻿﻿﻿﻿﻿

Once Cate and I were left to our own devices, we realized the two week clock was ticking, LOUDLY.  We got both cars detailed then put on Craigslist.  Within 4 hours we had a call on the Prius and early the next morning he had picked it up.  We have had a few calls on the CRV but luckily it has not yet sold - we still have lots of provisioning to do.

This past week we started the provisioning in earnest.  We would fill up the car, bring it home, then start finding places for it all.  We estimate we have 2-3 months of food and consumables on board now.  The pictures above show the results of one of the many trips.  The amazing thing to me is how Cate finds places to stash all the stuff!

We also got Julio around for his last work on Horizon.  He glassed in the aft deck box we had him build so now we have lots of dry outside storage for flammables, line, anchor gear, dive gear, etc.  Of course with new AwlGrip on the box, we are now under the gun to paint the rest of the deck.

In my spare time I also got the watermaker installed in the engine room and working nicely.  I had a problem with the "under the waterline" part since I thought that line was higher but after relocating the low pressure pump and fresh water filter and with lots of judicious bleeding, water started moving freely around the system with no bubbles and it was making 8.4 gallons of fresh water per hour while drawing 18 Amps.  We now have water freedom!
Posted by Mike at 9:59 AM 1 comment: 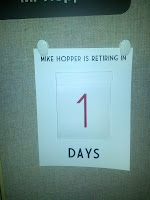 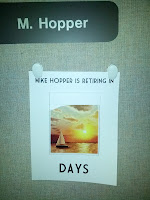 A few weeks ago workmates presented me with a daily tear-off count down calendar that ends on my retirement date.  That calendar is now down to single digits and I am really really REALLY excited.

Of course that excitement is offset somewhat by erratic sleep patterns as my wee brain tries to think through the list of stuff left to do before we cruise off into the sunset.  I am very fortunate to have experienced all this planning and cruising before, but much has changed in the 18 years since that time.  Even little things like an online permanent log of our travels, not even envisioned in the 1990's, are important now.  Luckily one of the McHop kids has taken responsibility to see about converting our SPOT Messenger check-in emails into something that can be submitted to EveryTrail.com or Google Maps to maintain a permanent track map.  Our hope is that the check-in points will be auto-populated as we go along, then we can update those points later with pictures and topical blogs as we find WiFi enroute.

As the date approaches, we have been busy doing last minute installs of equipment and sorting through bins to make sure only useful stuff takes up valuable stowage space.  I still have one big box of in-process stuff that is taking up room on the settee, and then there is everything covering the chart table top that needs to be sorted through and either pitched or stowed.  Yikes!


Cate is really happy about one of my projects last week.  Our forward shower sump pump was working slower and slower and sometimes had to keep running 10 minutes after a shower was over.  It finally stopped pumping altogether.   It was one of those old Jabsco 4 chamber pumps and I replaced it with a new Jabsco 50880 shower/waste water pump.  Man does Cate like that pump! It is quiet and is powerful enough to easily keep up with the shower water flow. The brochure says it even eats hair but I think I will keep the strainer in the line for now.


Horizon's radio shack is coming along.  A couple weeks ago I got the satellite phone mounted with all its hands-free connections but we still have to figure a good way to bring out the cable and mount the external antenna. 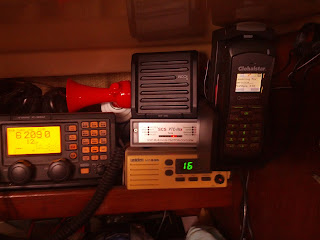 On the left is the iCom 802 Ham/Marine SSB radio with its Pactor III modem, then the in-cabin VHF and on the right is the sat phone in its mount.  Just under the radios is the chart table and directly under that is the new DR-55 drawer freezer we love so much.  Julio even made a great flip out seat so I won't have to stand crouched over while working the rig(s). 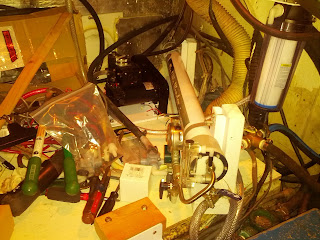 I have been busy in the engine room - finally got around to plumbing the Village Marine (now Racor) NF-200 modular watermaker.  Well, I am almost done and hope to get the rest done this weekend at anchor.

While spending quality time in the engine room, I realized there is room to mount a full size anvil vise so maybe next weekend after the JSI Marine Flea Market, we will hit a swap meet and try to find a nice used one.


Our rail space is quickly being overtaken by four jerry jugs for gasoline and diesel and now, 2 Kayaks.  Once we add the two SS Dahon folding bikes, are we going to have enough room to move around on deck?  If only Avon manufactured an inflatable barge... 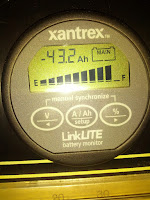 We are now day 4 with the battery charger turned off.  The solar panels and wind generator have been keeping up with the power use of the in-built refrigerator, drawer freezer, all the pumps, lights and radios.  The caveats are that temperatures have been in the 60's reducing refrigeration needs, and the microwave, TV, and the stand-up refrigerator are still running on shore power.  But it makes me hopeful that we will not have to run the engine too often once we permanently unhook from the dock.

For my upcoming birthday Cate gave me a most appreciated Microsoft Surface Pro 128GB model with Windows 8 Pro.  I am still getting used to the touch interface but so far it is pretty intuitive and so much easier to lug around than my old laptop!  A major downfall is a shortage of drivers for things like our scanner... 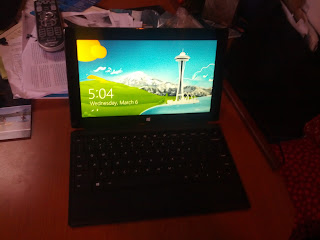 One of our last major to-do hurdles was nailing down health insurance and as of yesterday that is now in place!  We now have a policy with Azimuth Risk Solutions with world-wide coverage that meets all of our criteria and it is backed by Lloyds so it should be solid.


We got our new boat cards! 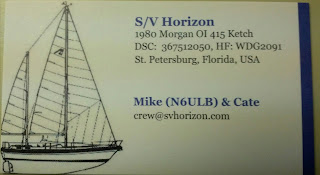