It was only a two day motor sail from Il a Vache to Bahia de las Aguilas (Bay of Eagles), Dominica Republic, a total of 120 miles. But what a difference that two days made. After the constant trash fire smoke of Haiti, the loamy earth smell of tilled soil was a most welcome change.

There is nothing at Bahia de las Aguilas, no stores or town, but it is well protected from the easterly trade winds and southwesterly swells; a welcomed calm anchorage.

After a night and day recovering we set off around Isla Beata and the point bound for Barahona. We arrived about 10 am and dropped the hook in the protected basin off the tiny marina, Club de Manatee. Within 30 minutes we had cleaned up and launched the dinghy to pick up the four government officials waiting on the dock to clear us into Dominica Republic – immigration, customs, M2 drug enforcement, and marine guard. It was one of the easiest times clearing in we could have. It took about 15 minutes with everyone in our cockpit and drinking Kalik Bahamian beer before the paperwork was completed. Then money changed hands ($83 required but all I had was a $100 US bill so we “donated” the rest) then they were done. As they were disembarking from our dinghy at the marina, the immigration official recommended Fernando as a local English speaking guide since we are obviously Spanglish challenged.

That afternoon we had Fernando walk with us into town to get pesos from the ATM at Banco Popular, a sim card and data plan for the phone from Claro (about $18USD total with a 1GB data plan), lunch ($19USD for 3 people including beer and sodas), and the mercado central (open market) for a huge bag of vegetables including tomatoes, onions, lettuce and potatoes for about $2.40USD.

Along the way we marveled at the waterfront park with skate boarding ramps, newly constructed kiosks and even exercise equipment. There was also a sizable crew doing maintenance and keeping everything clean. This was so different from most of what we had seen in quite a while. 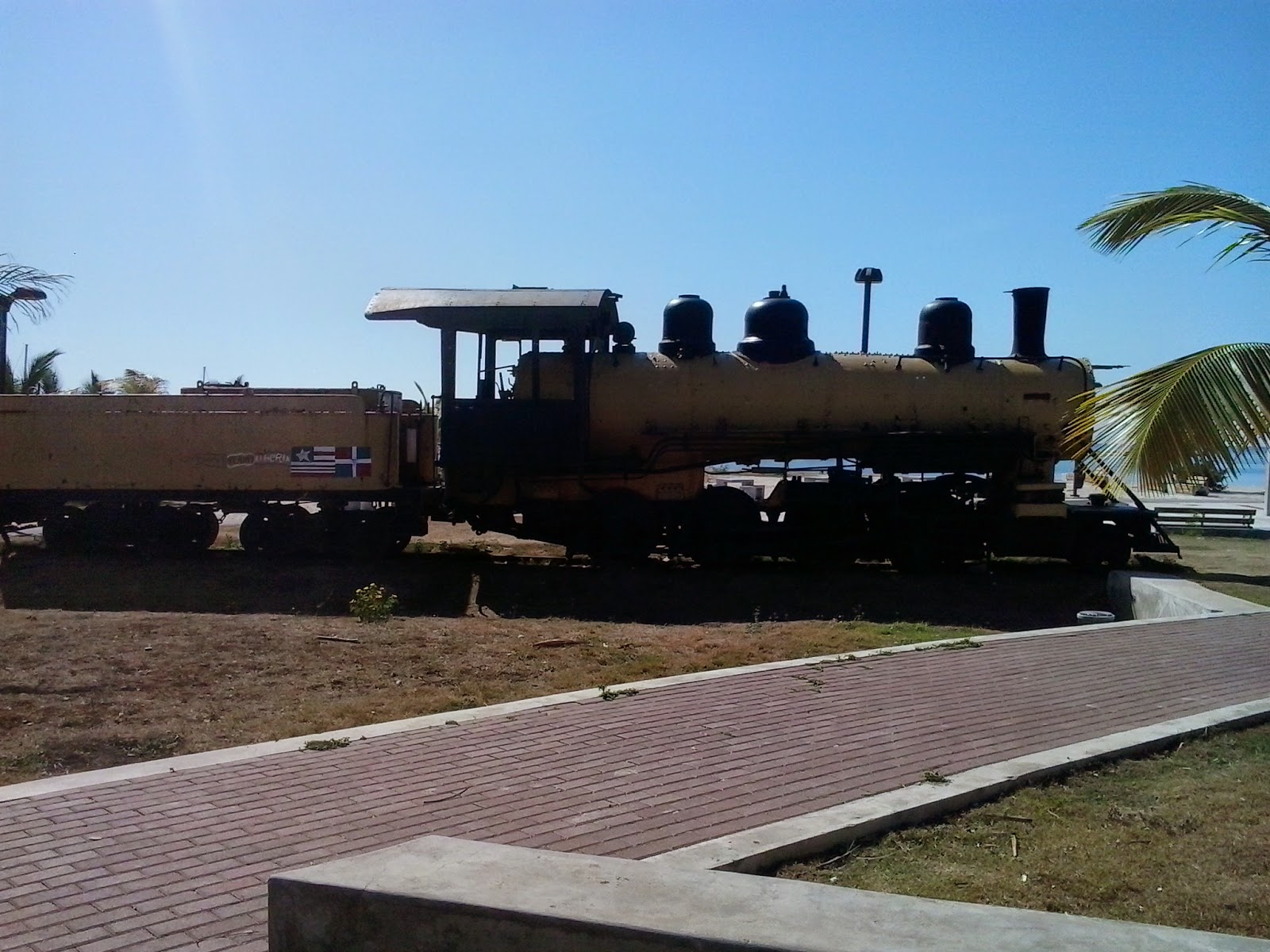 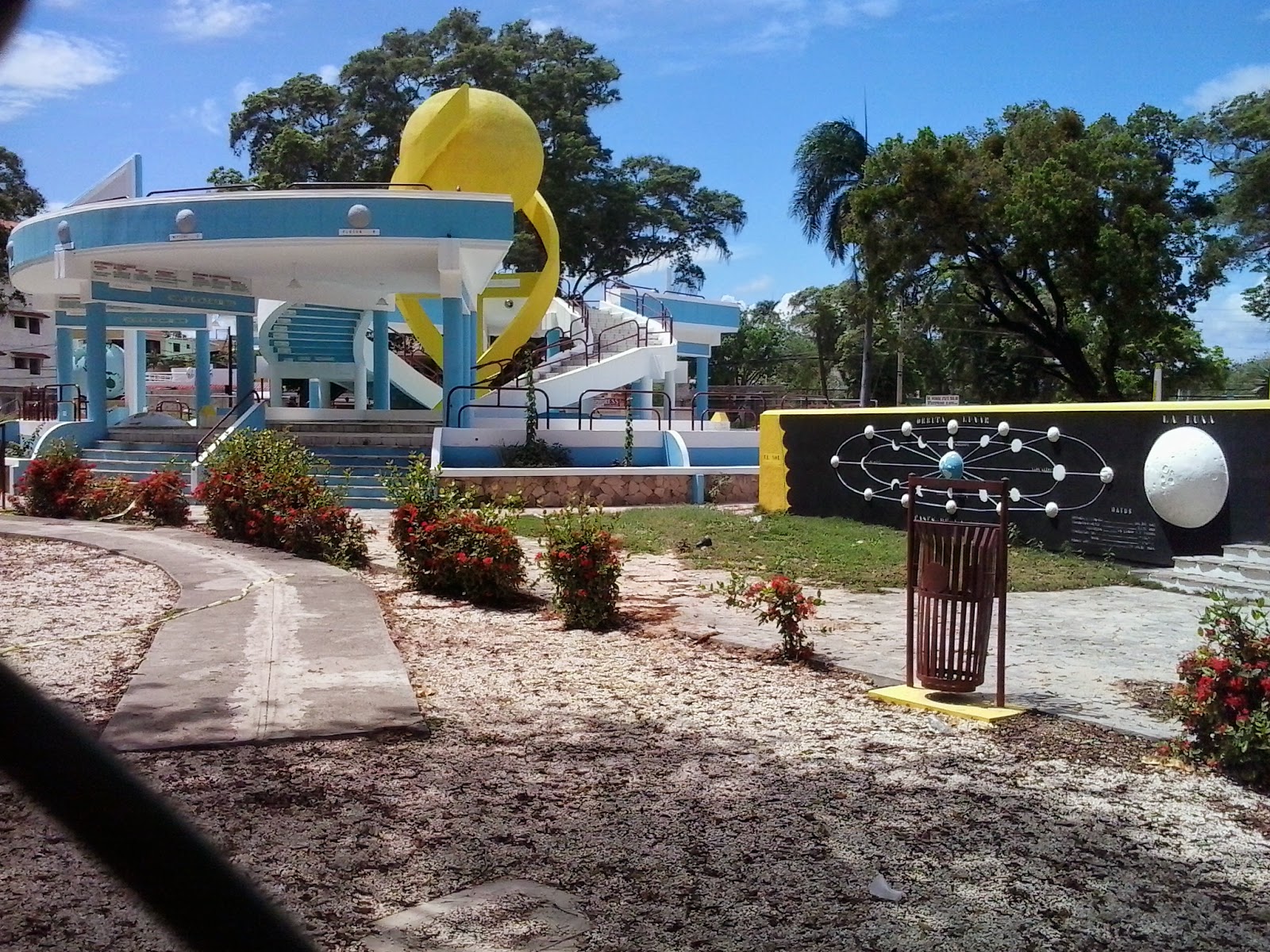 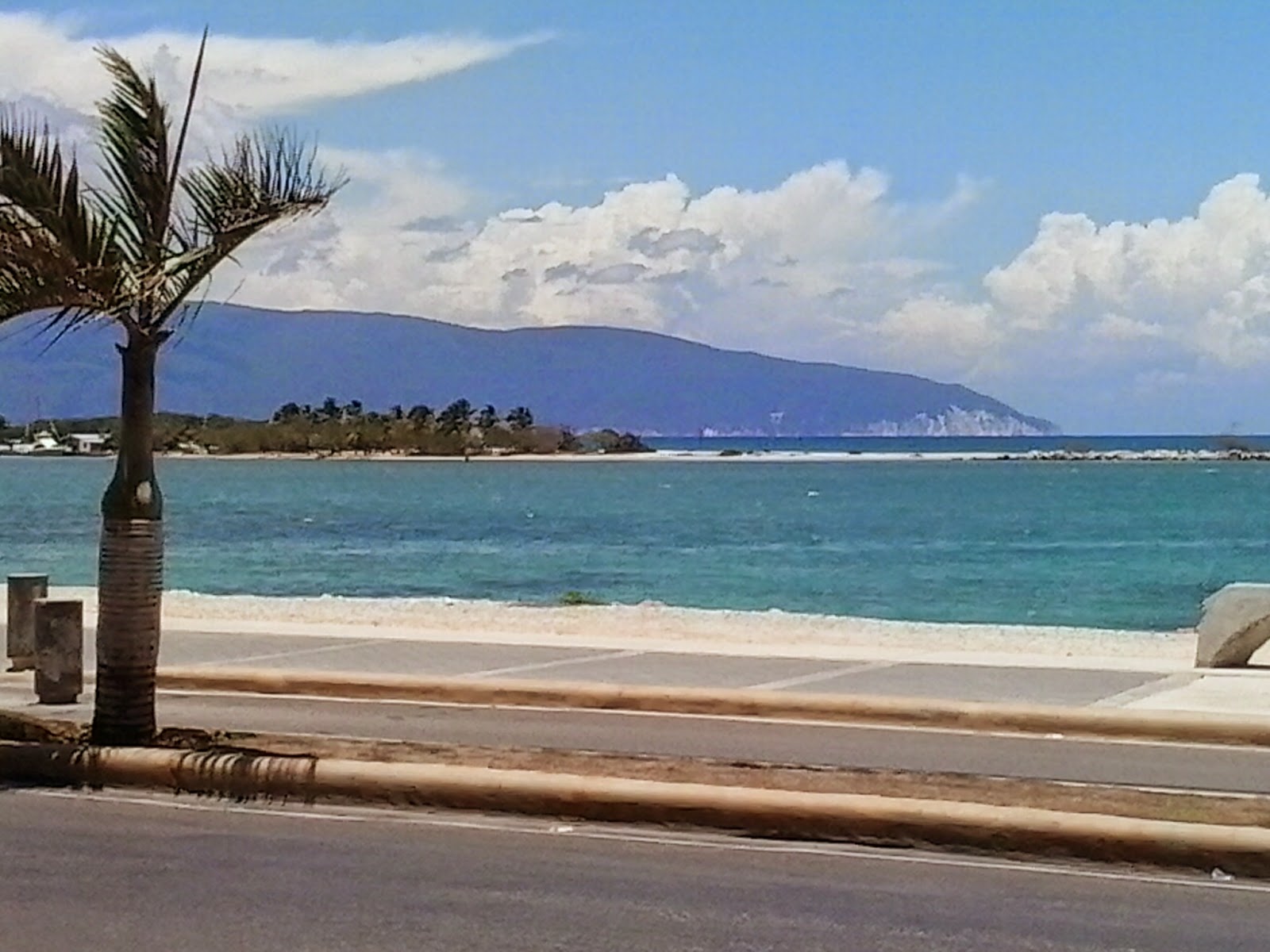 At one point another boat had a diesel truck come in to top up their tanks so we put the 20 gallons of diesel we got at Great Inagua, Bahamas into our tank and refilled our jugs from the truck. In all we spent about a week and a half in Barahona before being rousted. It turns out that the tiny basin we were anchored in also had the quay for freighters collecting gypsum from the plant next door. We weighed anchor and moved outside the basin and waited. A behemoth loomed on the horizon and when I checked the AIS it turned out to be Doris, a 597 foot freighter. We looked at the dog leg turns to get into the basin and said No Way! I was enthralled ... over the next two hours one small tug helped the ship inch through a sea lane and around acute turns that left maybe 10 feet either side. It was truly an impressive feat and I will forever feel inadequate for my inability to back our comparatively tiny 41' Horizon into a slip. 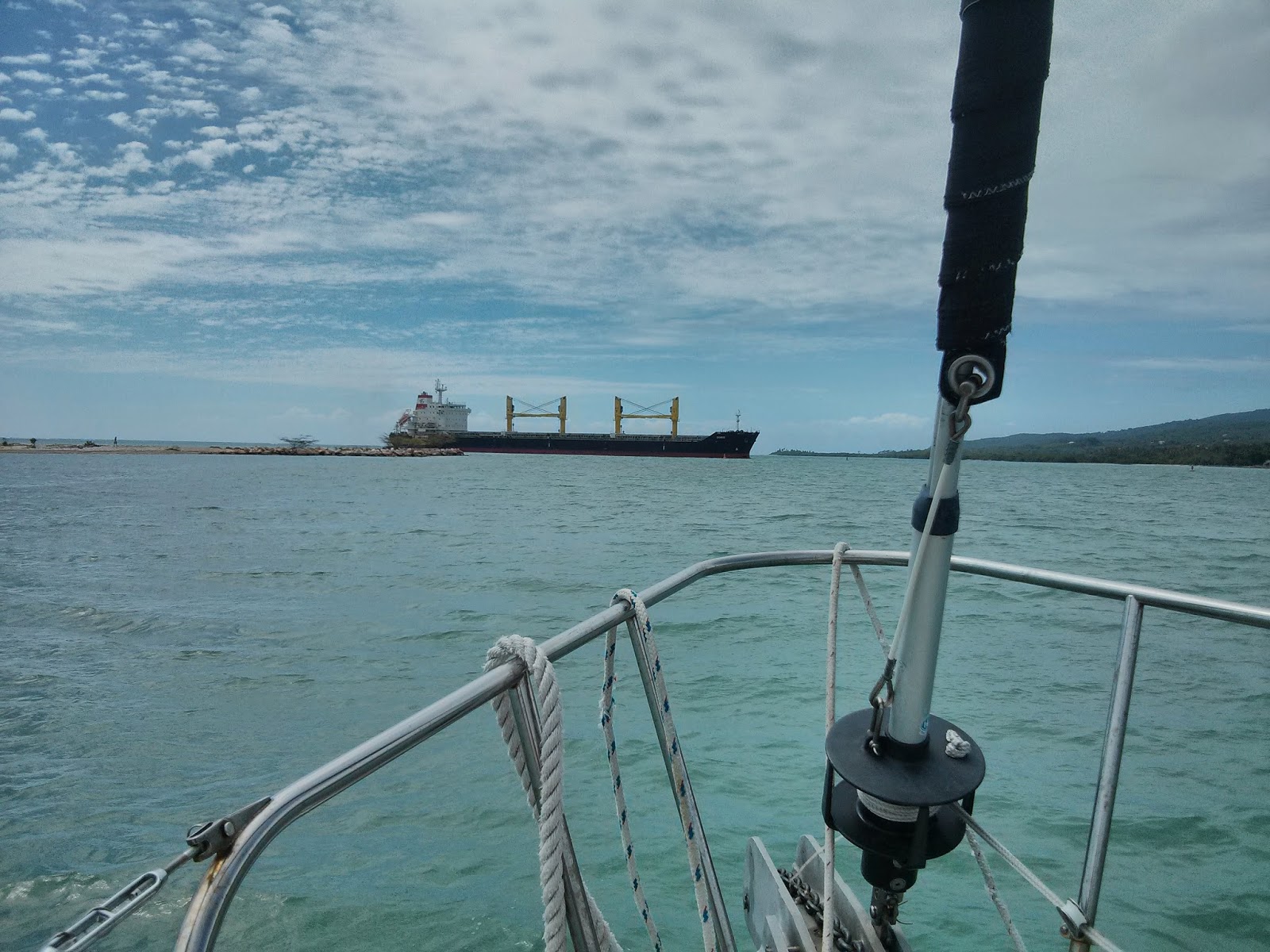 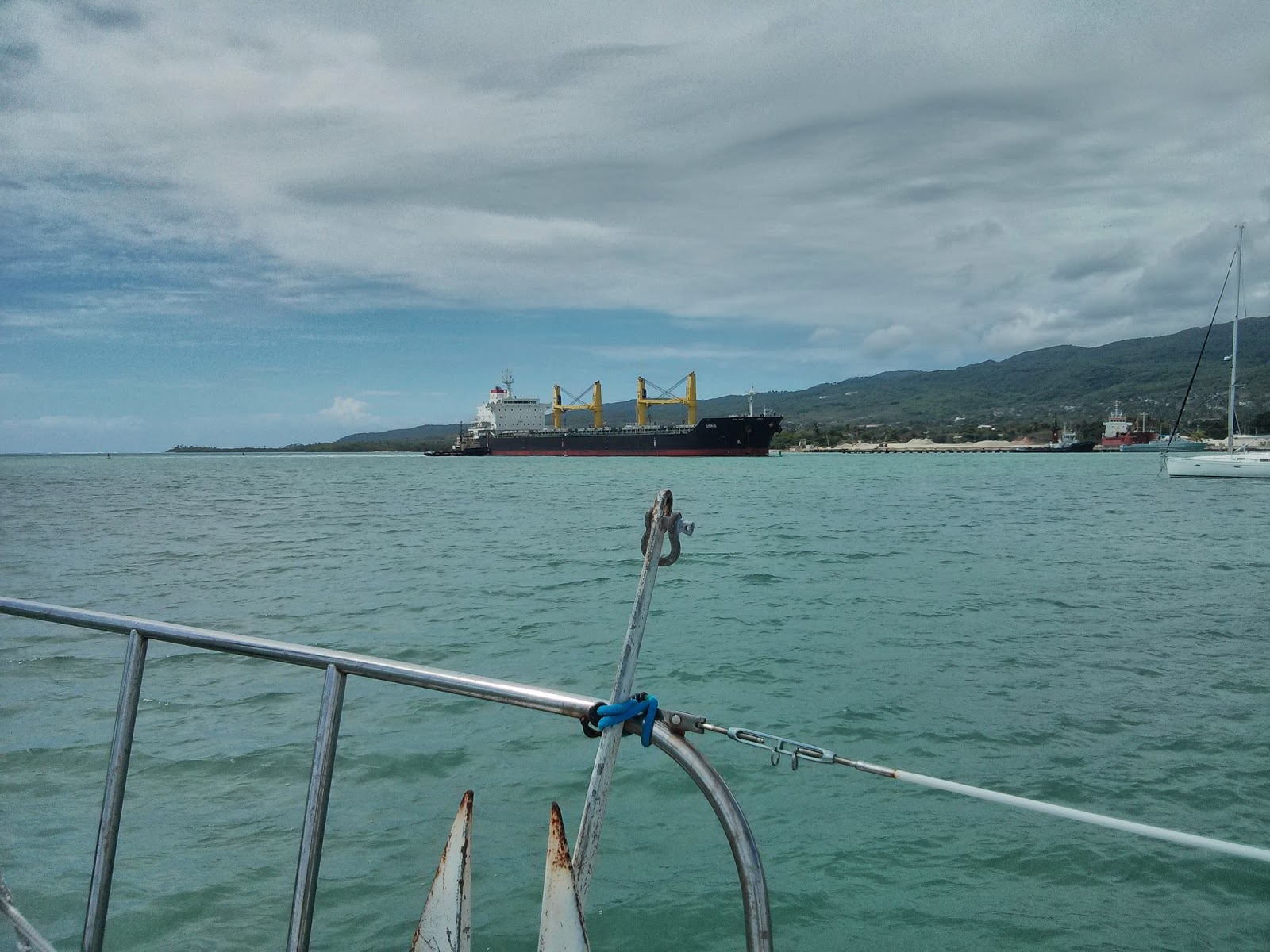 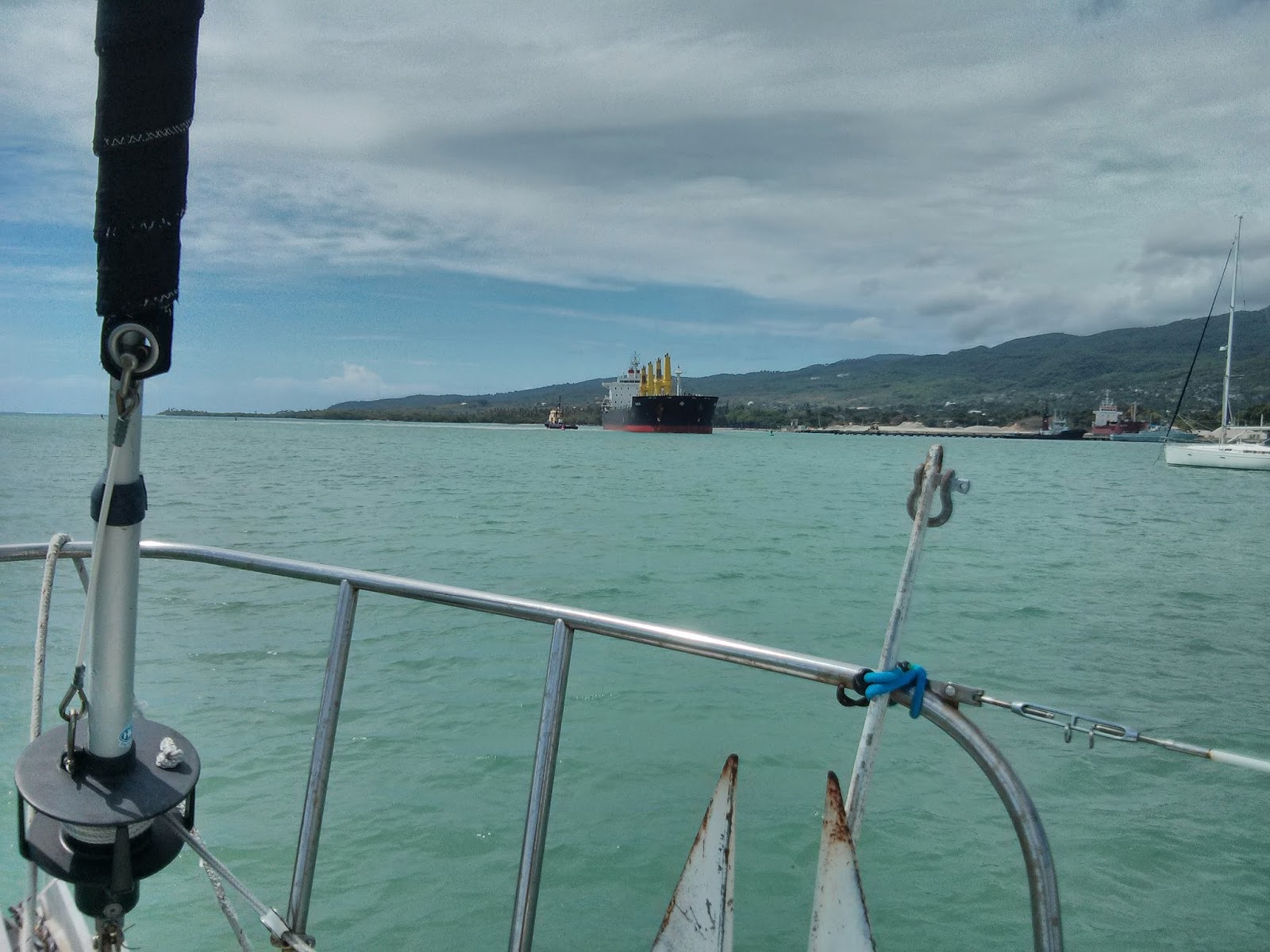 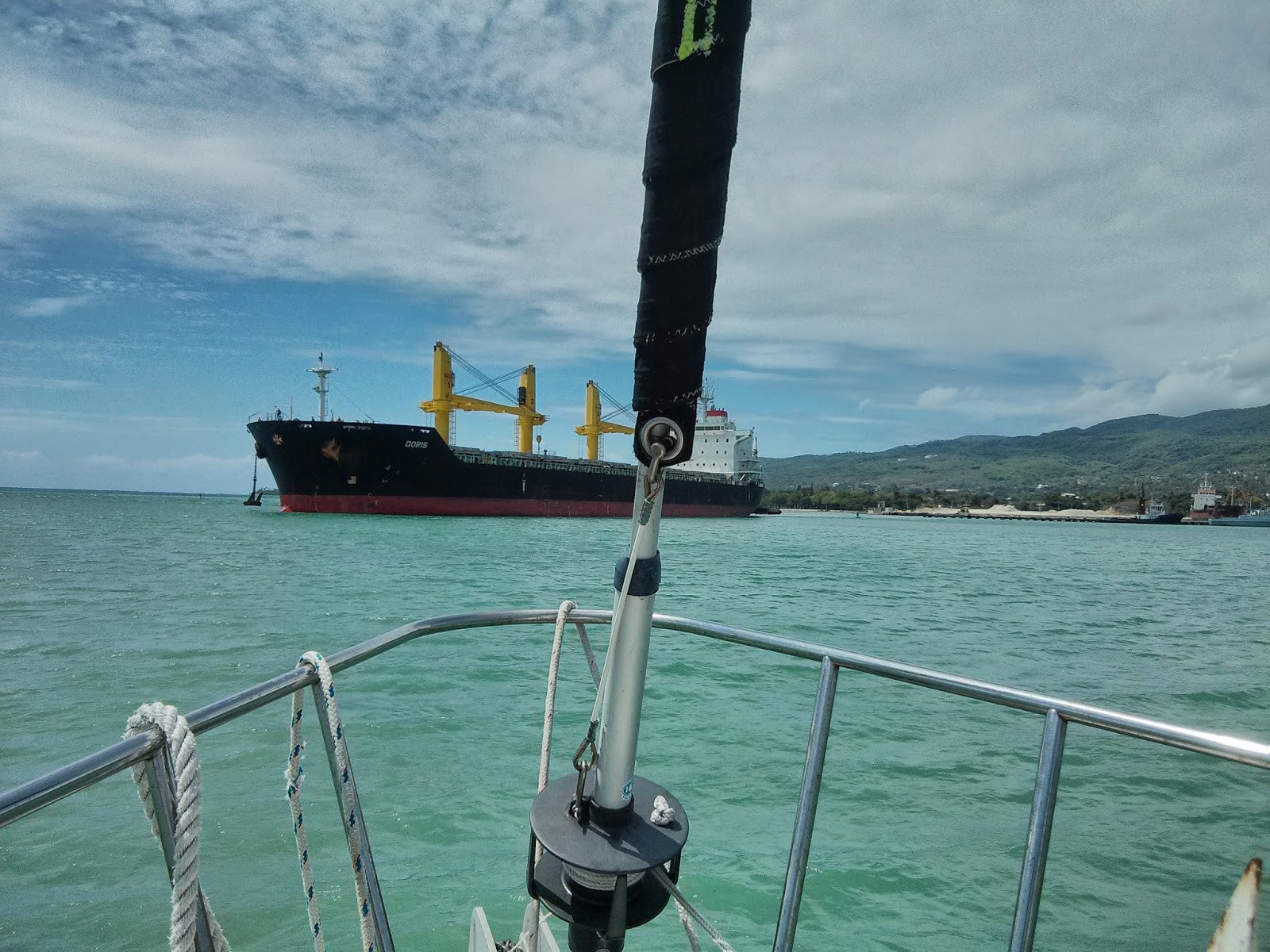 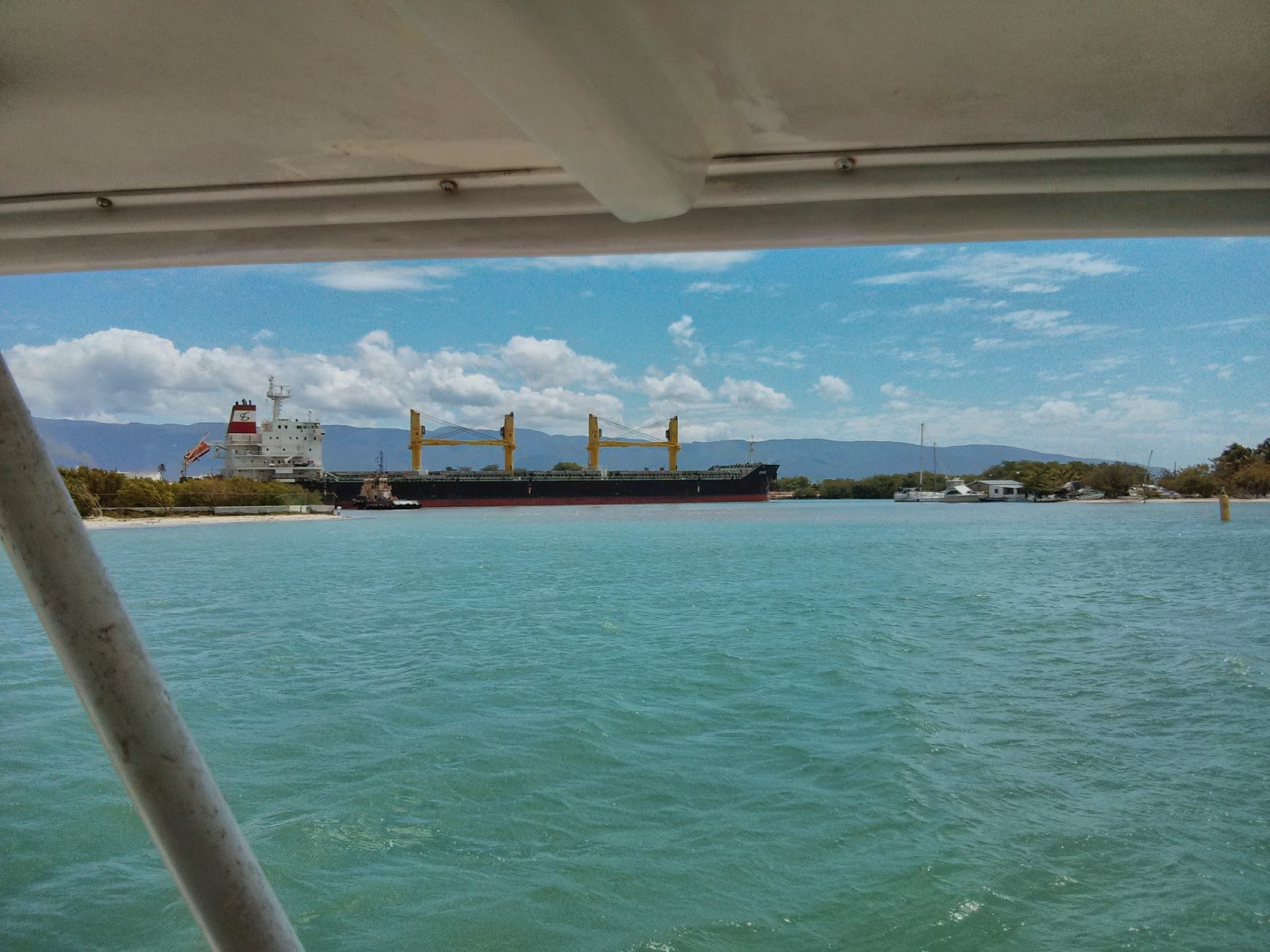 We cleared out of Barahona that day bound for Salinas leaving the next morning. About 6AM we weighed anchor and started off. Around the sea buoy, about 1 mile out, the engine started surging so we headed back to anchor near where we had been to diagnose the problem. The Racor fuel filter was thoroughly clogged with dirt, probably from the Great Inagua fuel. We spent 3 hours flushing and cleaning the filter housing and replacing the filter before we felt comfortable heading off again.

Salinas is a somewhat pretty town, very quiet and low key compared to Barahona. It looks like a beach party town to us. We ate a couple meals at the hotel and wandered around town but didn't really find a good place to just sit and watch the world go by.

We are now in Boca Chica and have been for a couple weeks. We are on a mooring at Marina Zar Par, the marina part owned by Frank Virgintino, the author of the free Haiti and DR cruising guides we have been using. This town is well know for the party atmosphere, I think spring breakers frequent this area, and it has a reputation as a bit of a hook up place. Weekends especially but even during in the week, blasting music from shore bars and boats can make it hard to get to sleep before midnight.

We did find one more interesting thing about Boca Chica.  Remember the movie "My Blue Heaven"? This place reminds us of that movie - most of the downtown restaurants have Italian names and serve Hispanic versions of Italian food, even the deli is Italian!

Our second day here, Dan and Rose from Exit Strategy who we had met in Il a Vache invited us to join them in a day trip to the waterfalls at El Limon. It turned into quite an interesting trek. We headed off in their rental car in the morning. We were talking too much and ended up in Santo Domingo the capitol city, obviously missing a major turn. An hour later we tried what we thought was the correct exit but soon found ourselves in the middle of small towns and dwindling pavement. 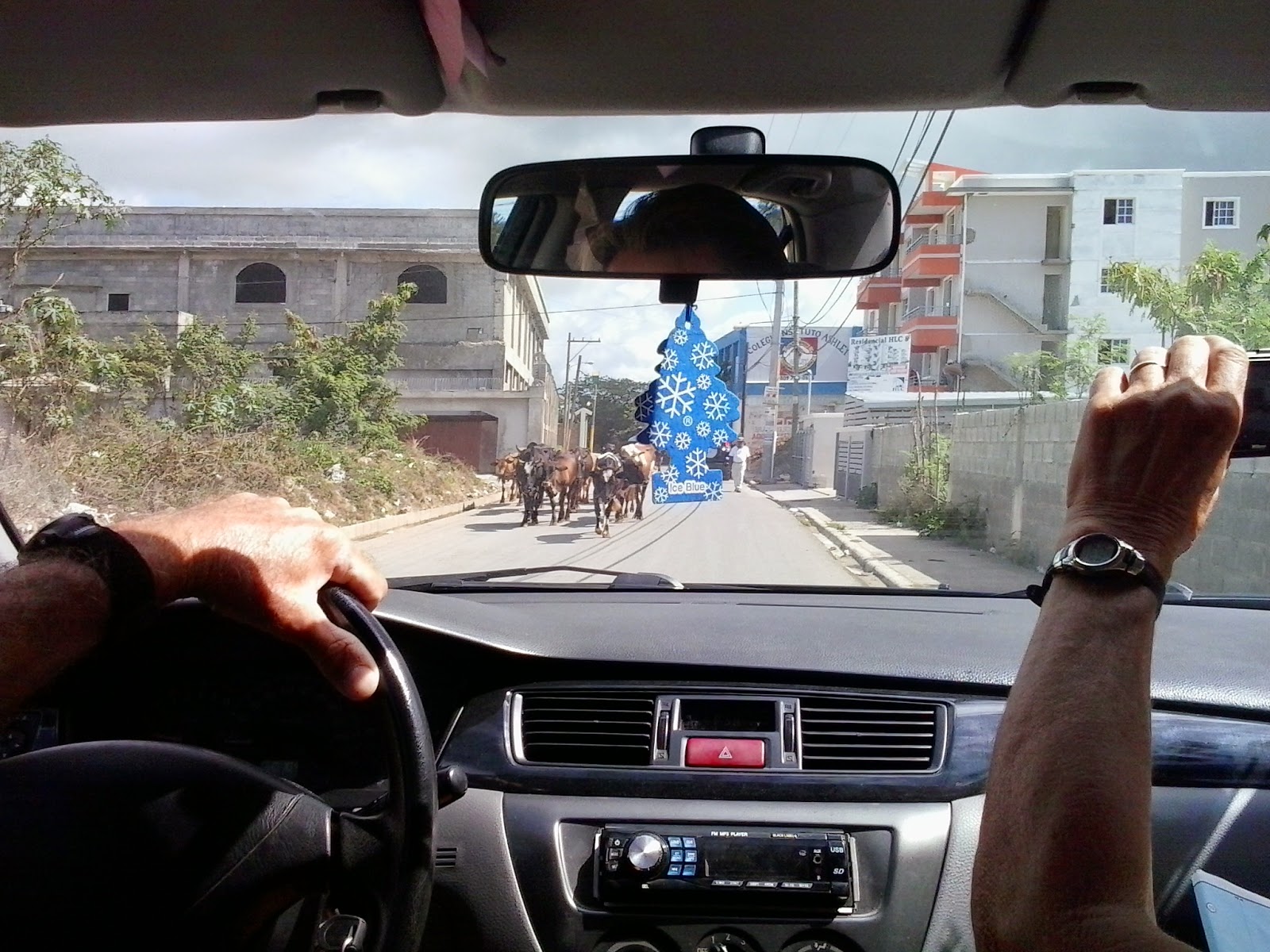 We continued to try to follow Google Maps navigation ending up in narrower and more rutted dirt tracks until the voice took us directly into a town dump. We turned around and tried to find our own way out. About 30 minutes later she started giving useful directions but meanwhile we had seen a side of Dominica Republic that few gringos have been likely to see. I think I can mark that one off my bucket list.

Once again on main highways we crossed the country towards the north going over hills tall enough to make ears pop, past towering mesa-like embankments, and through the central valley filled with miles and miles of palm trees.

We did make it to El Limon and stopped at the first place advertising the waterfalls. The owner energetically explained the process of hiring horses with individual guides to get us to the waterfalls. He also said his wife was a very good cook and suggested we opt to have lunch at their establishment after wards. We did.

So Dan, Rose and Cate got horses, Mike got a mule. Okay, I was corrected several times as “mula” since my mule was a she! 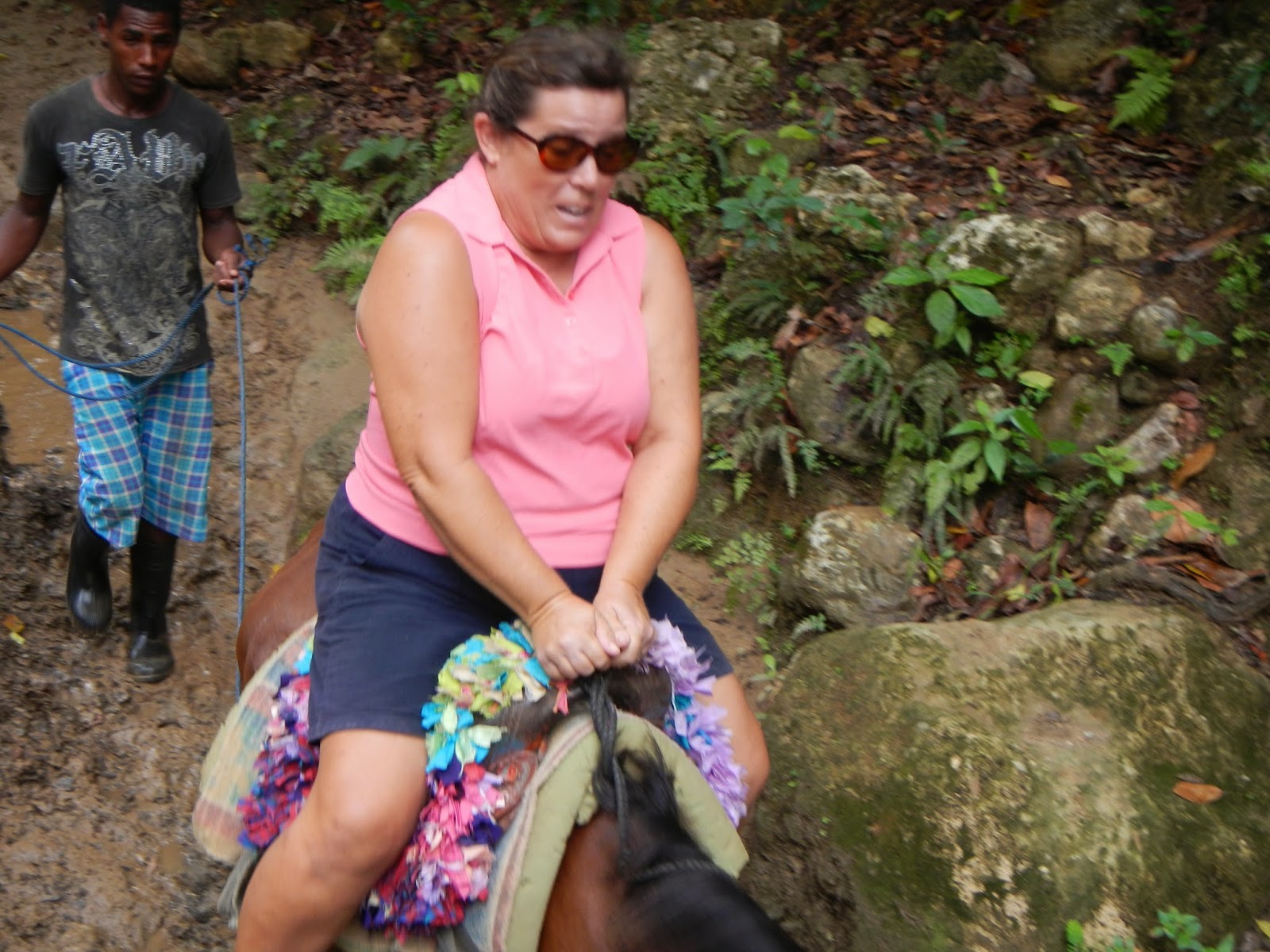 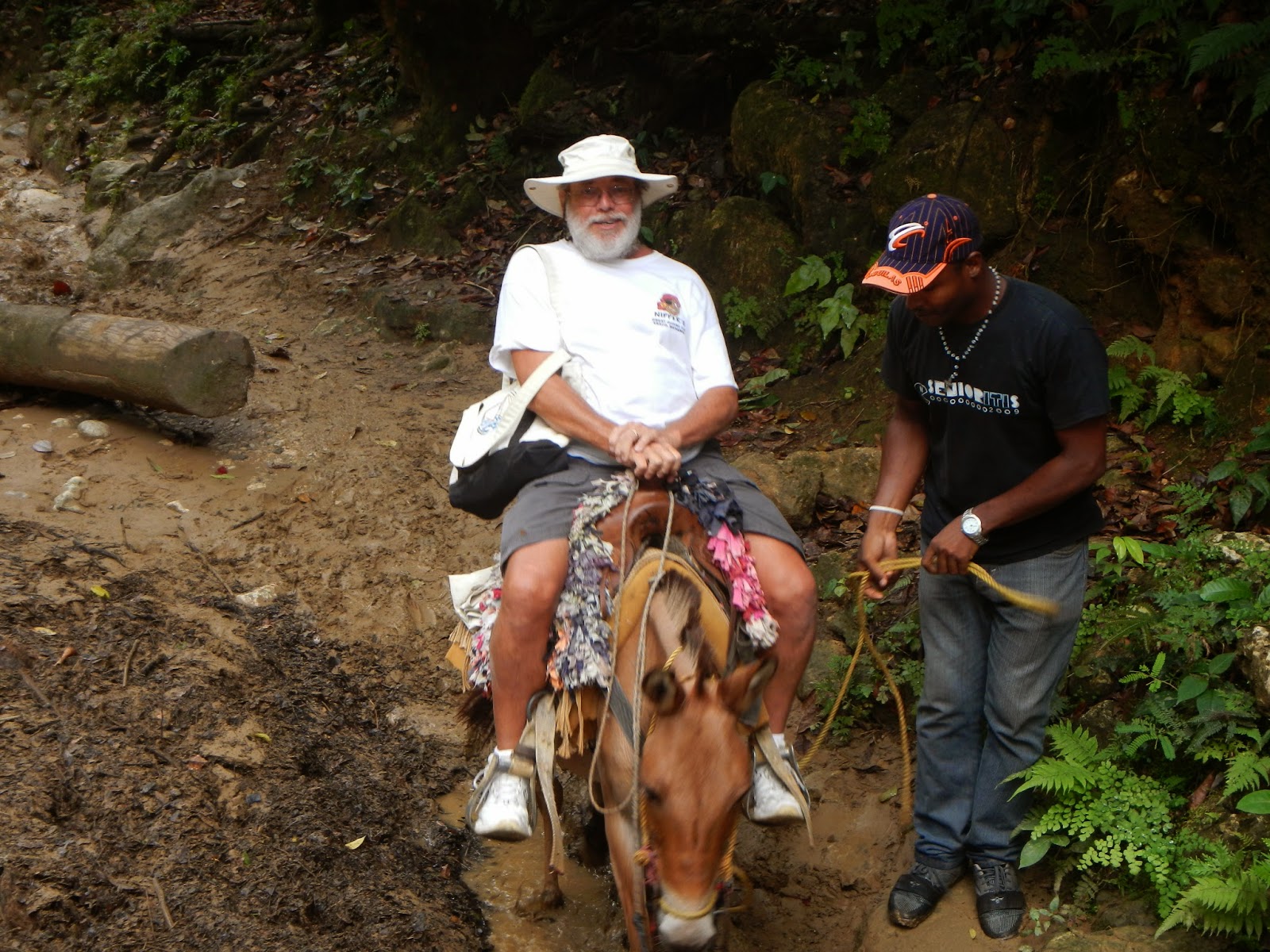 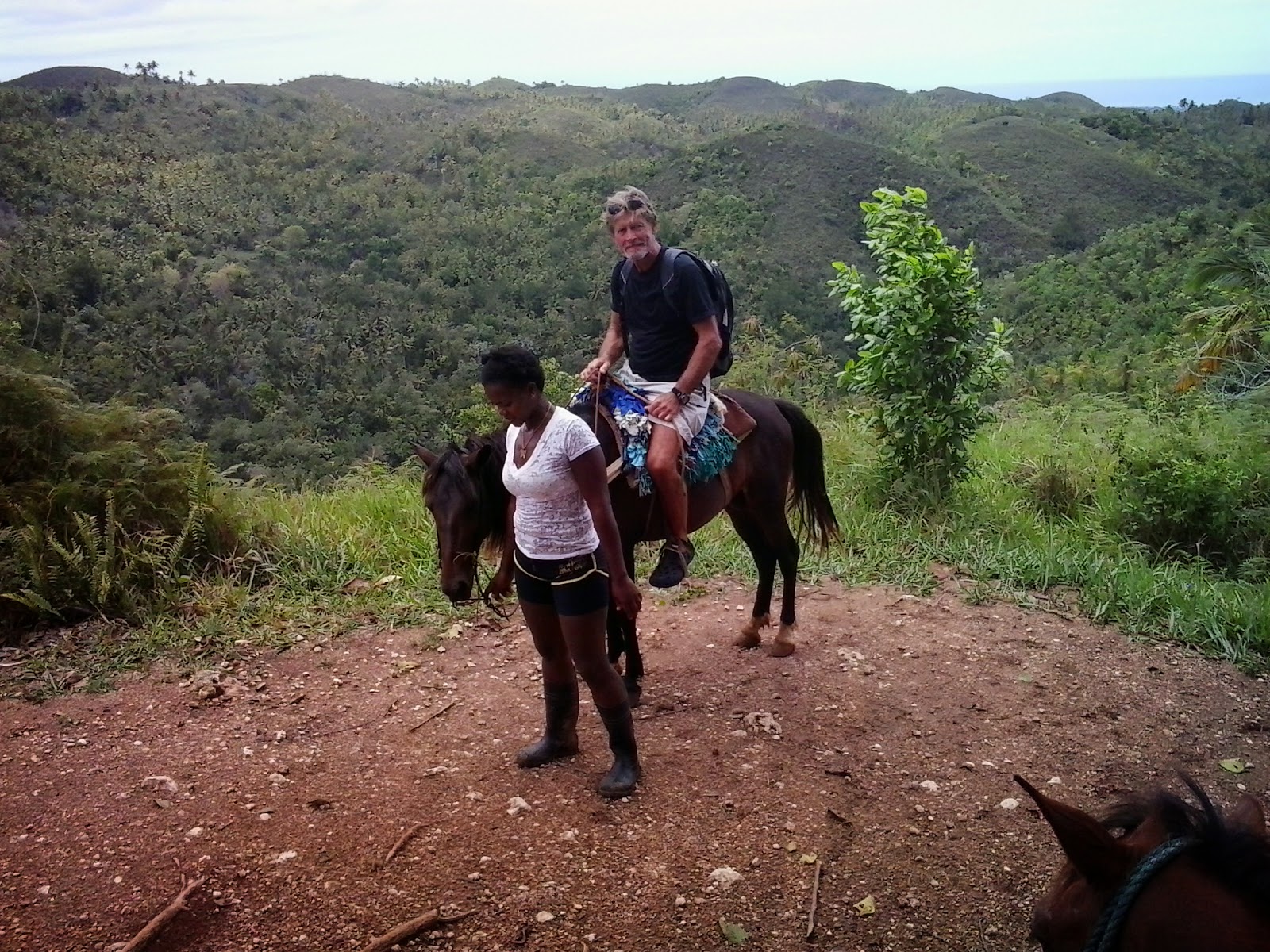 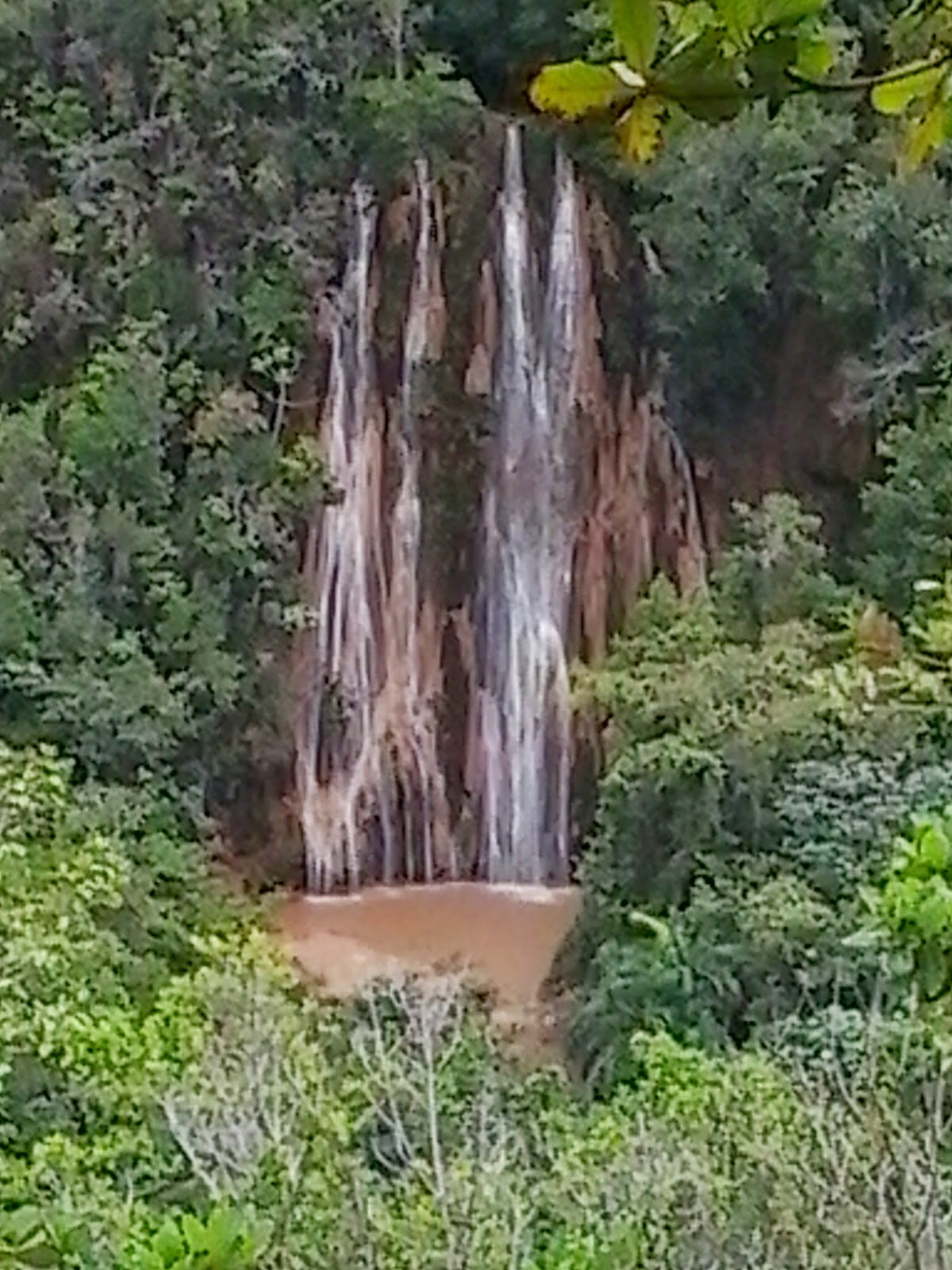 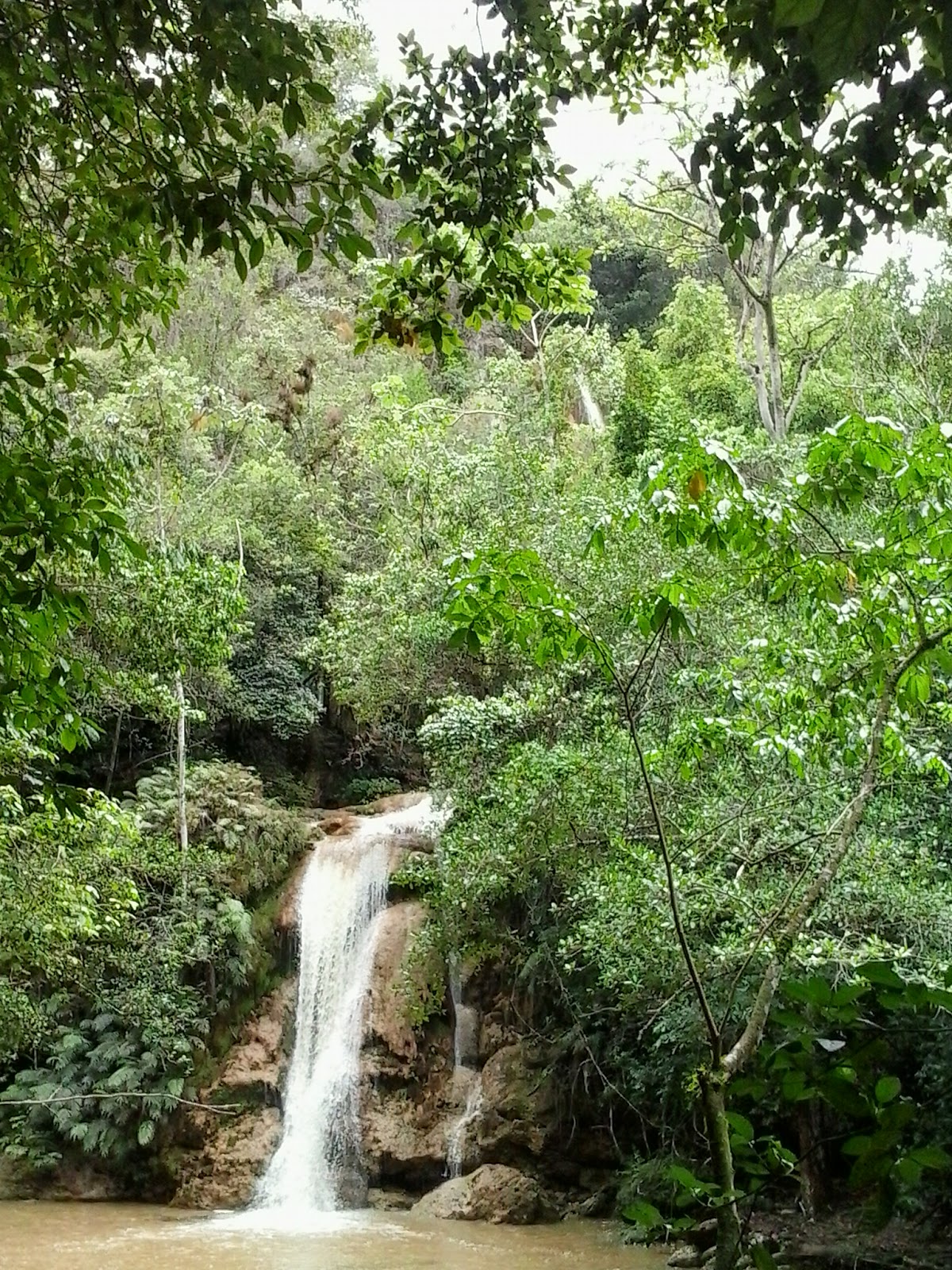 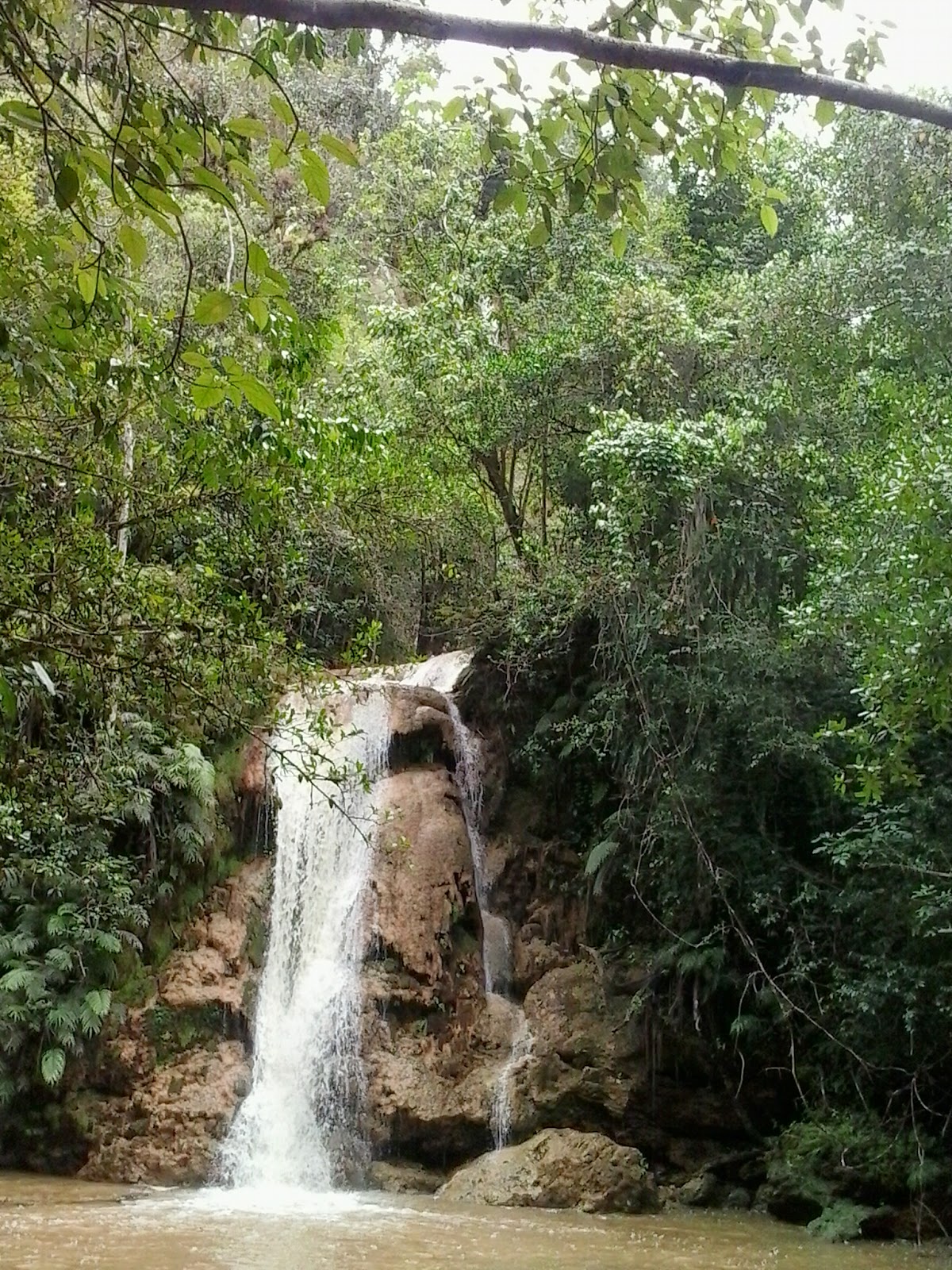 I would write about the falls and the trip there and back but I was too terrified of falling off my mula :) Okay, there were trails, a river to ford, mountains with extreme vertical slopes to ride (YIKES!), and finally a water fall. My mule, um, mula grumbled and snorted the entire way. I know she was saying “get this damned gordo gringo off my back!”, “can't he go on a diet?”, or other such whinnies to that effect.

A couple days later Exit Strategy sailed off for Curacao for the summer and we were left to our own devices. The harbor master of the marina, Rico, is really helpful. We wanted to have a day trip to Santo Domingo and were terrified of driving ourselves after watching what Dan had to put up with. Rico hooked us up with a local driver and guide for a day trip to the capitol. It was $150USD but well worth it for us. We went to old town and toured many of the buildings, some of which dated back to the 1500's. We strolled through downtown parks and the mile-long pedestrian market street. Santo Domingo advertises being the oldest city in the Americas, having the oldest street, oldest cathedral, and the oldest university (Santo Tomas de Aquino, 1538). During our tour we saw most every bastion of US influence including Taco Bell, Krispy Kreme, Burger King, and Payless Shoes. Unfortunately I saw no indication of true civilization: White Castle burgers. Sigh. 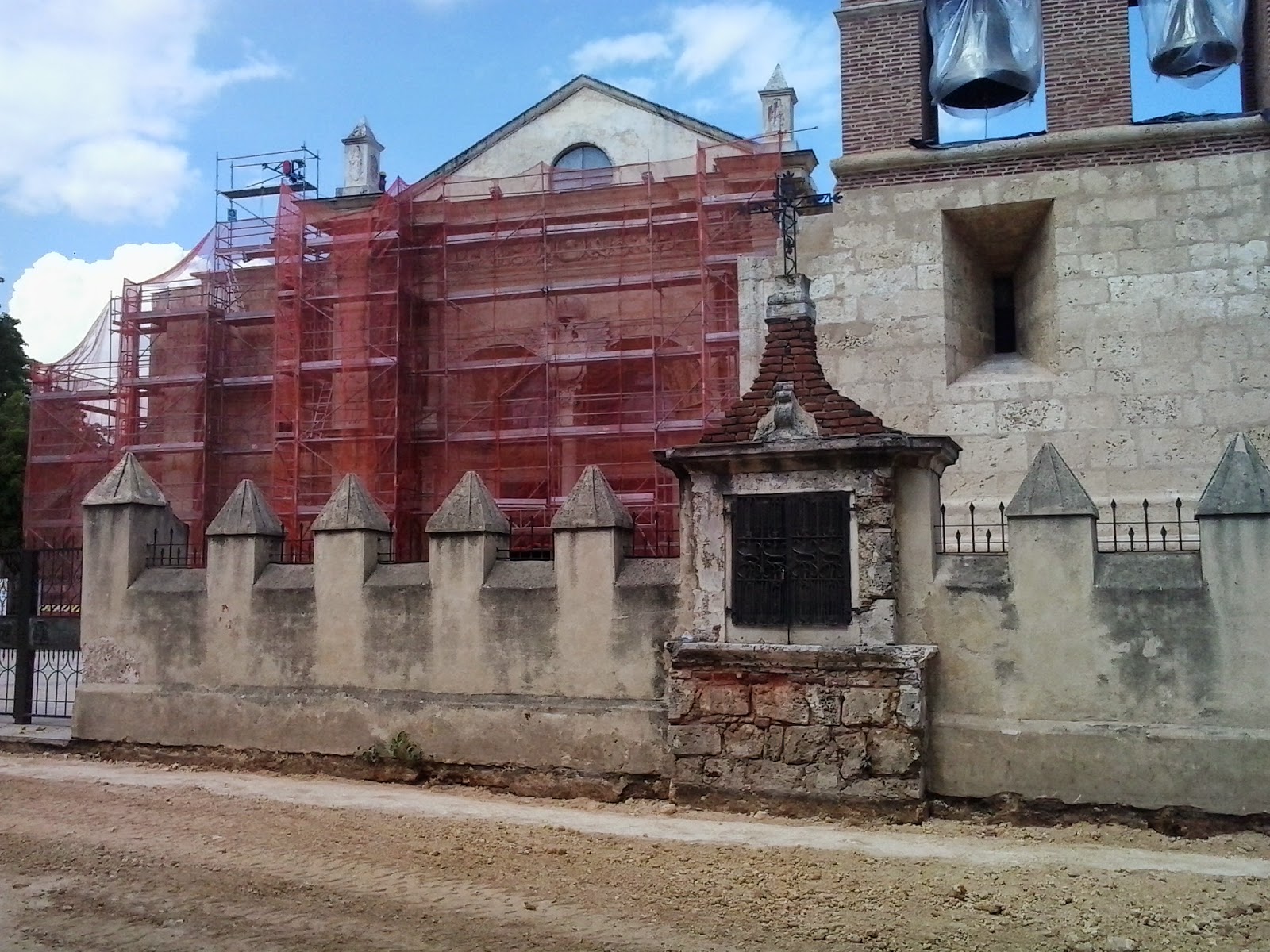 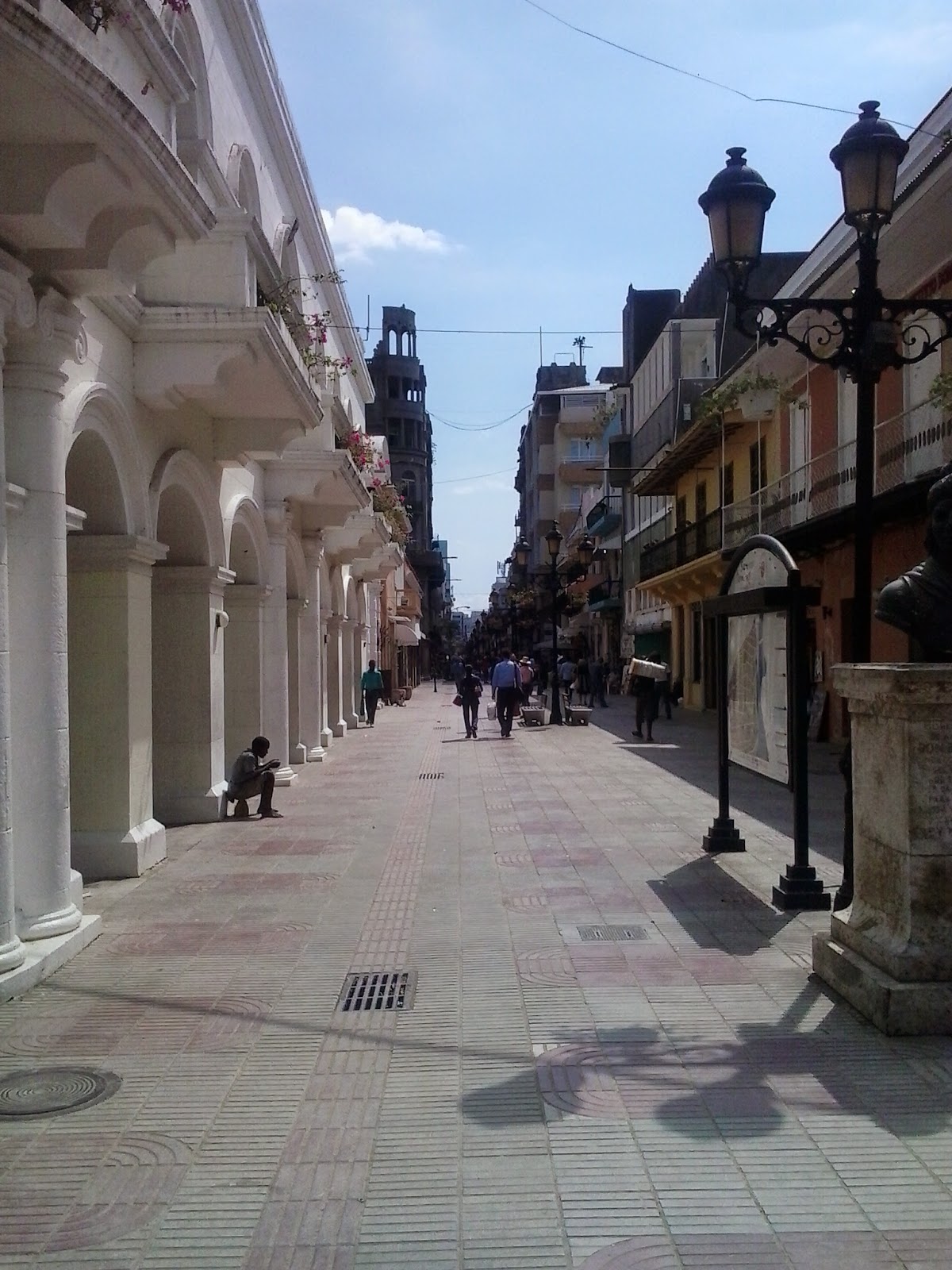 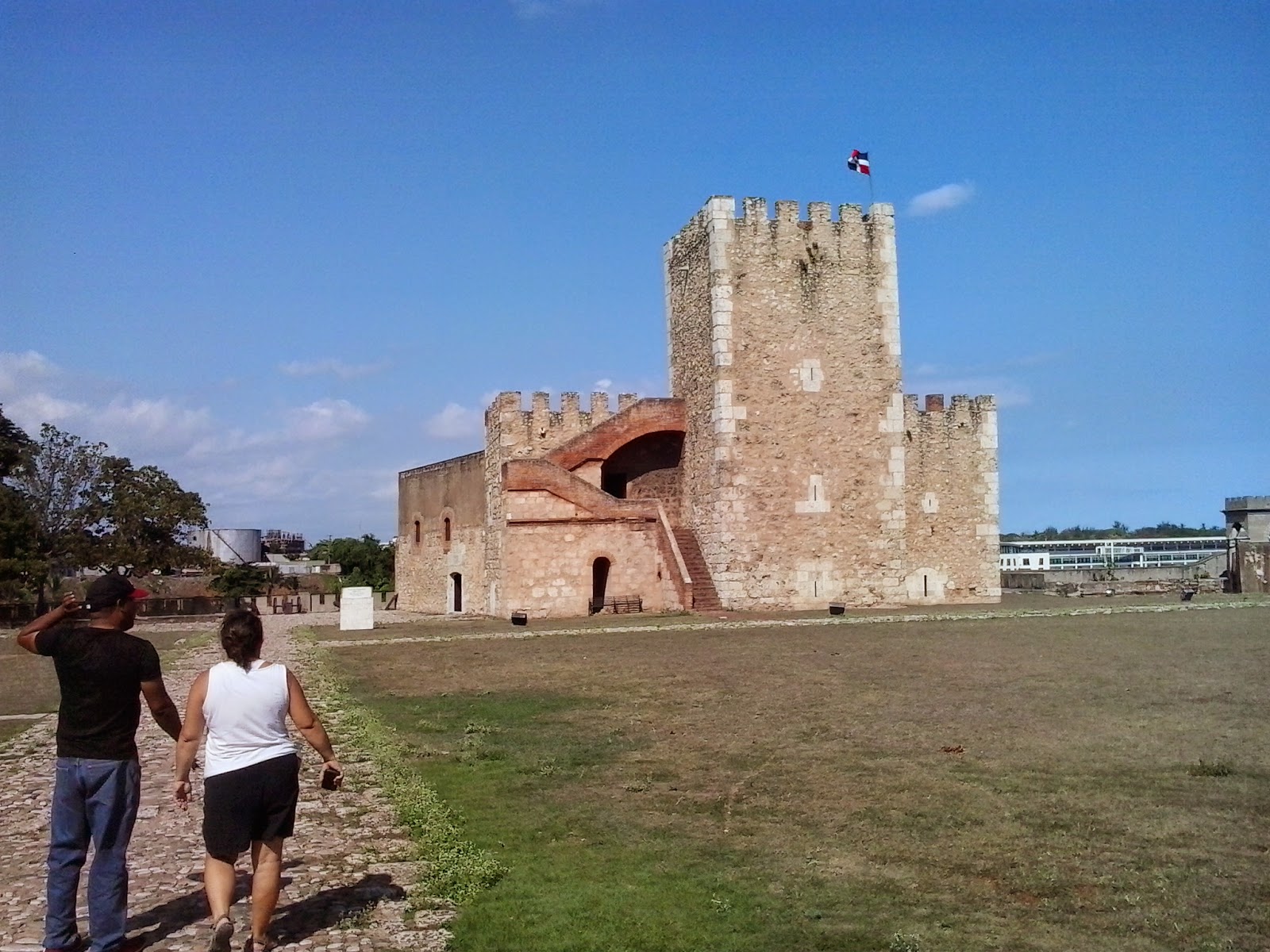 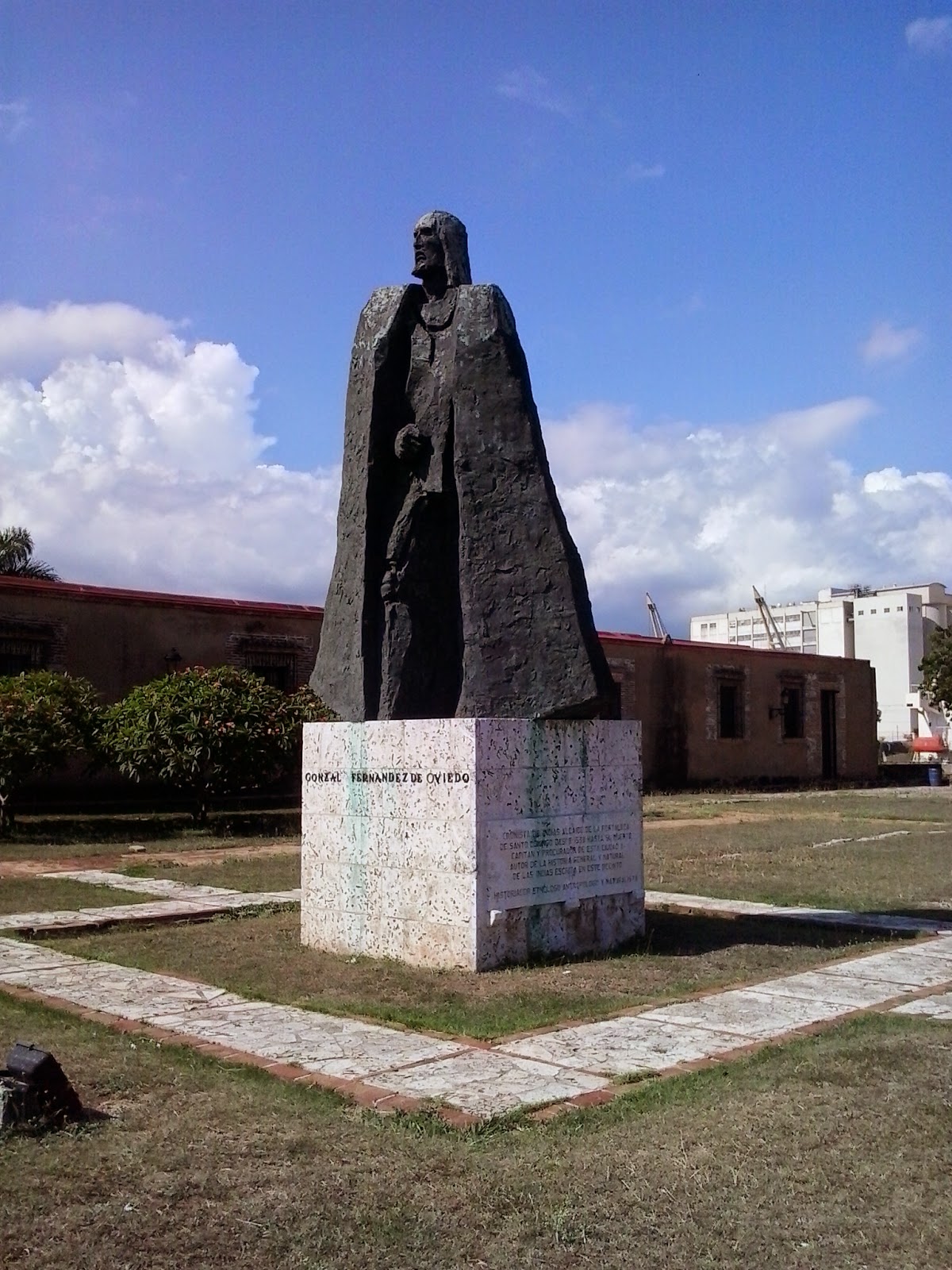 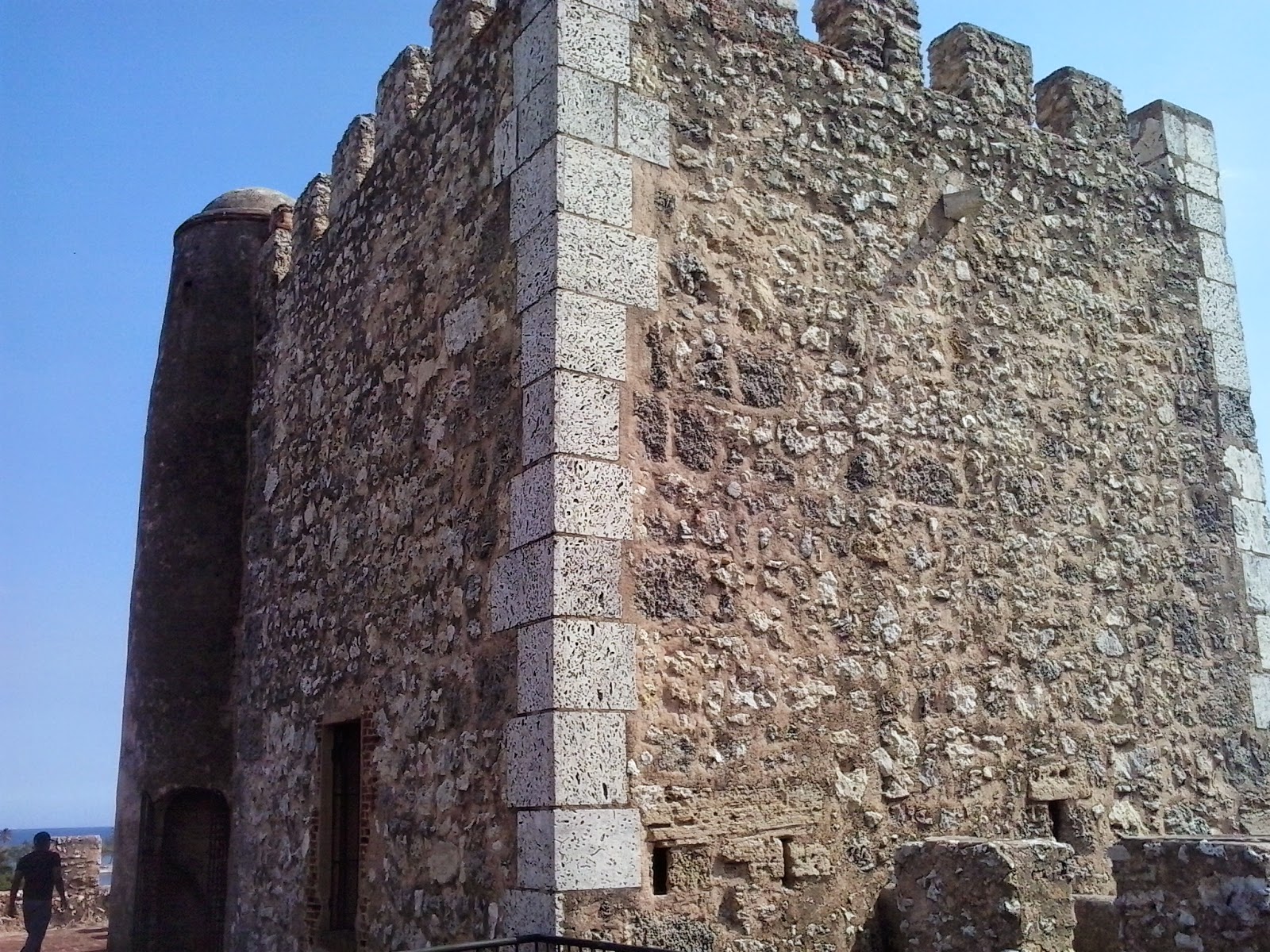 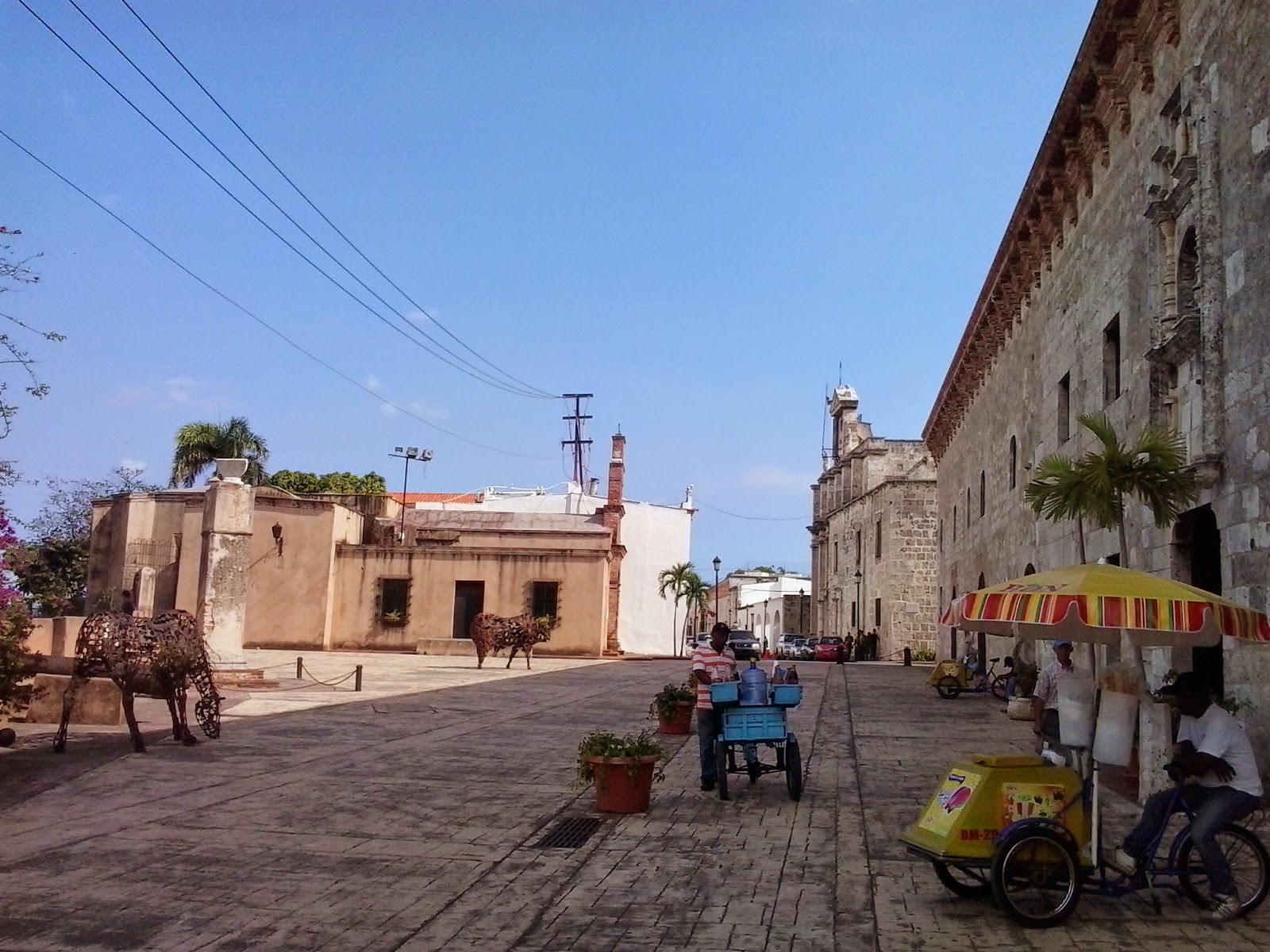 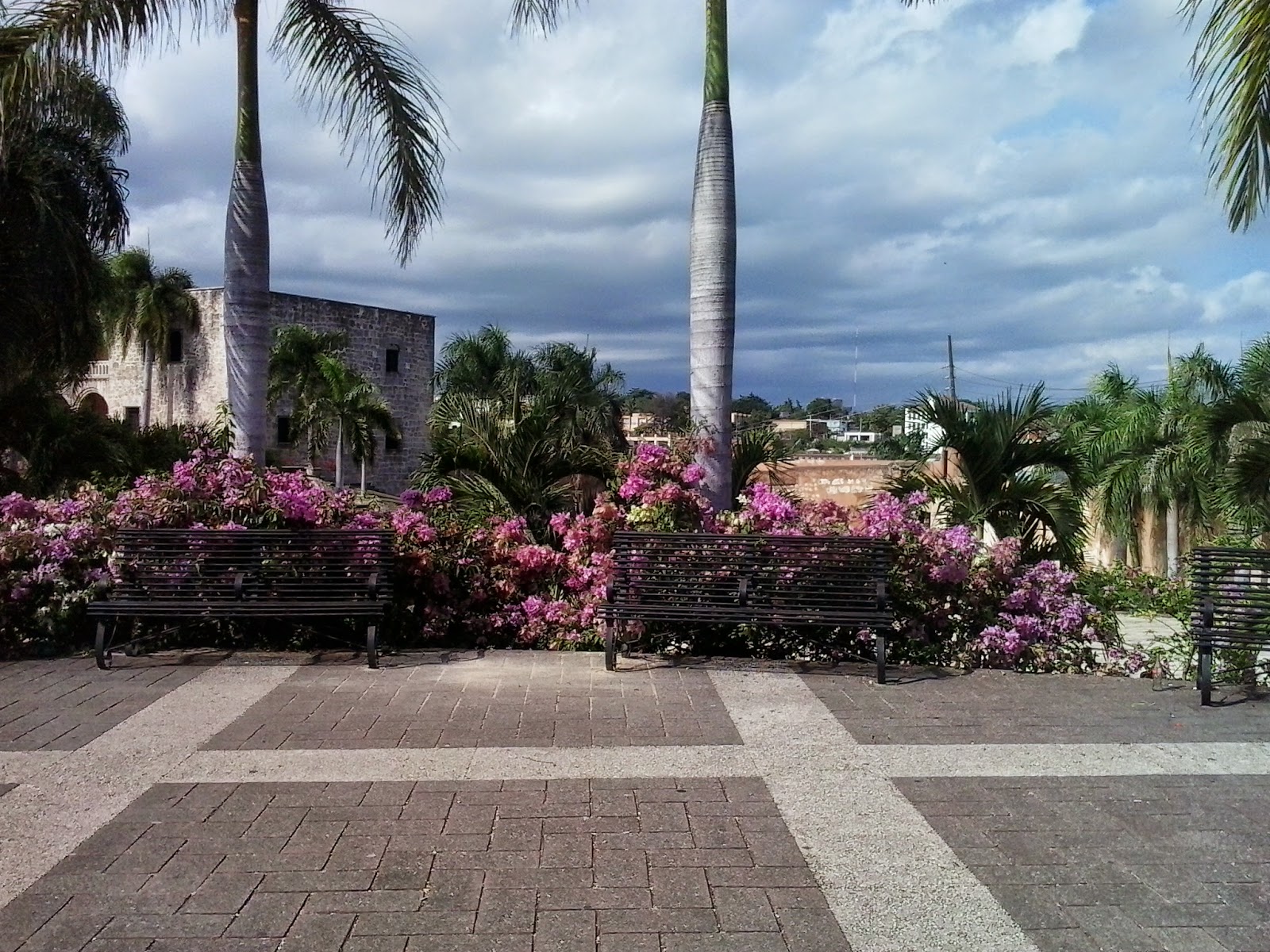 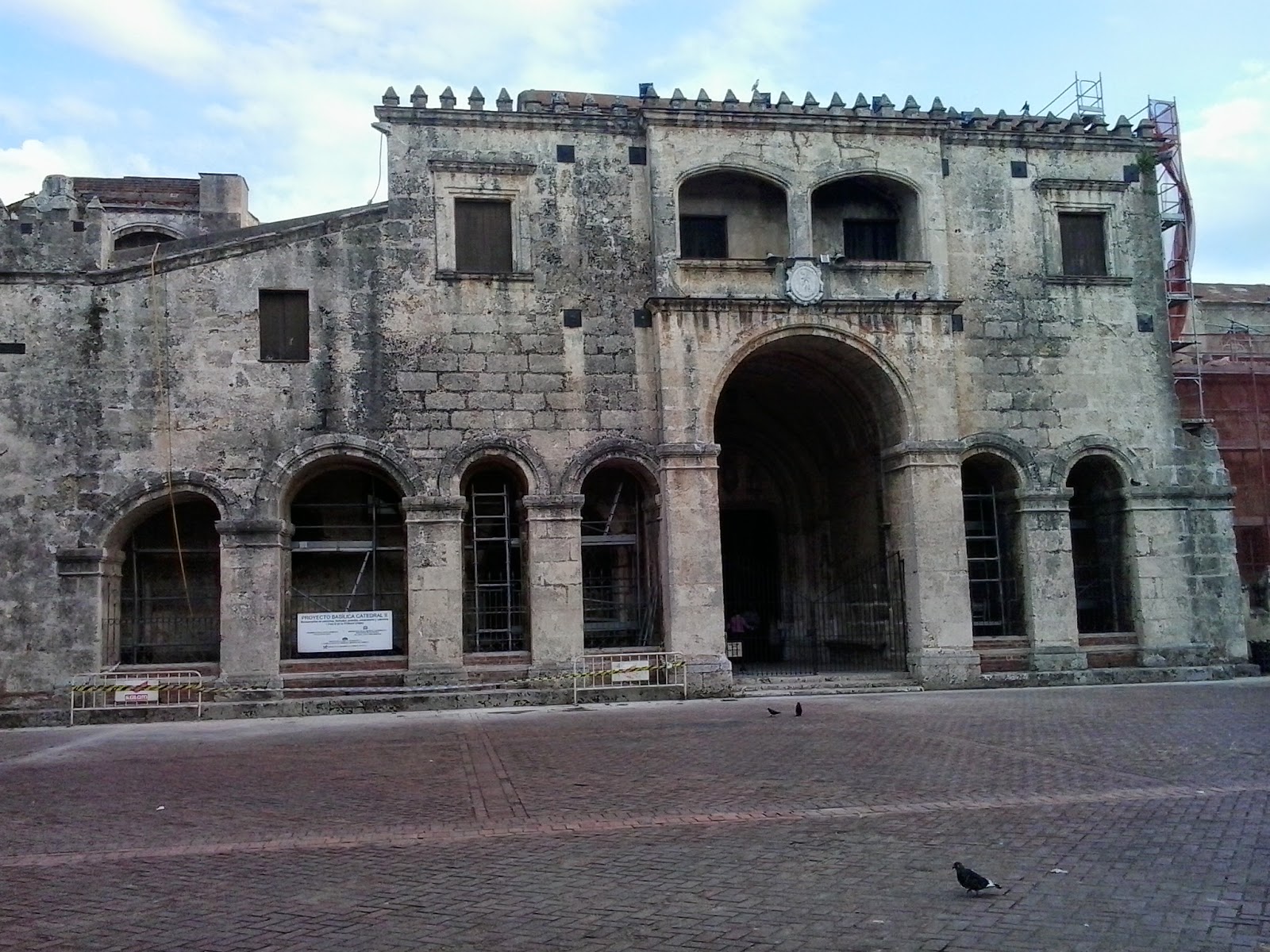 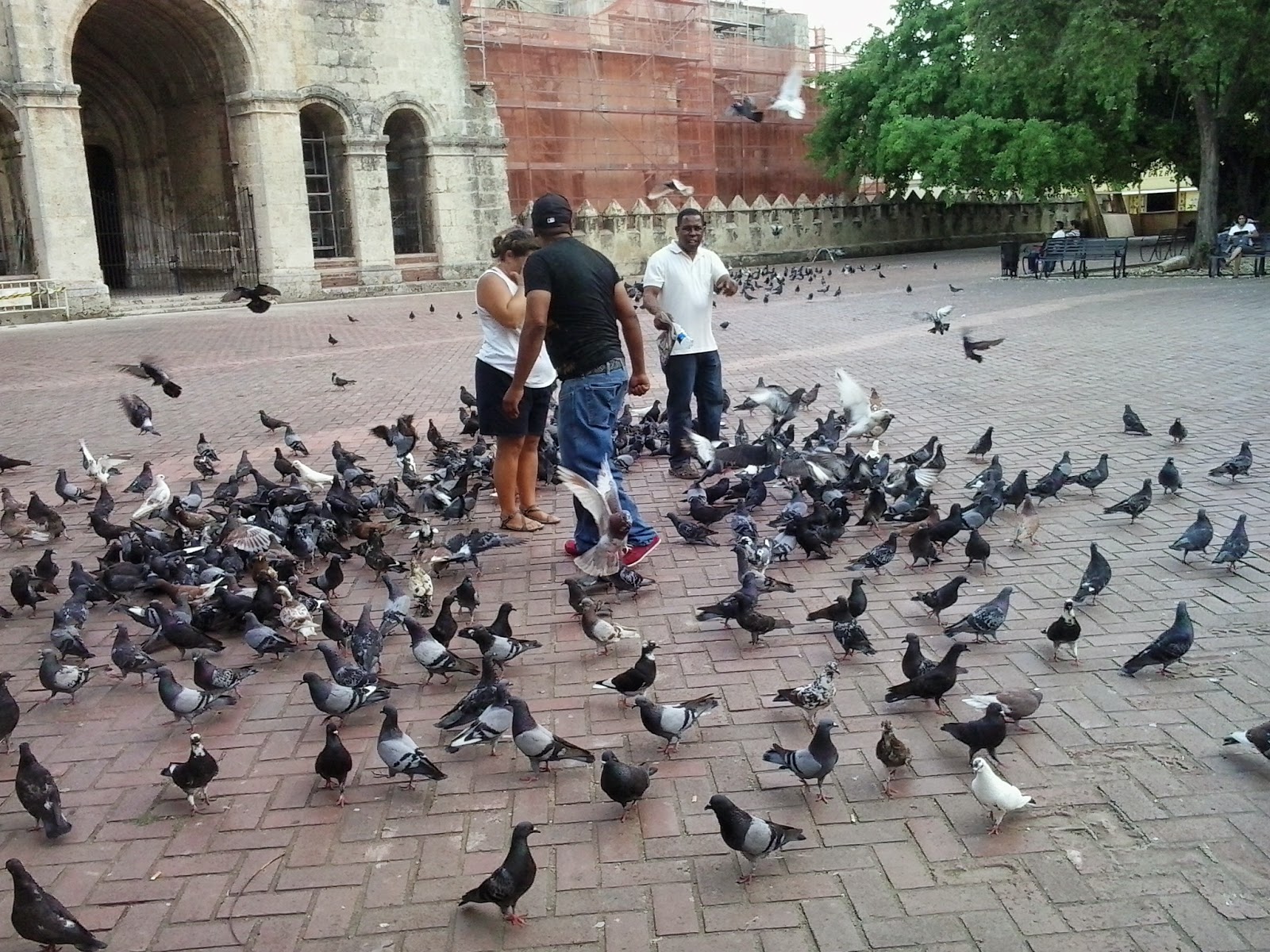 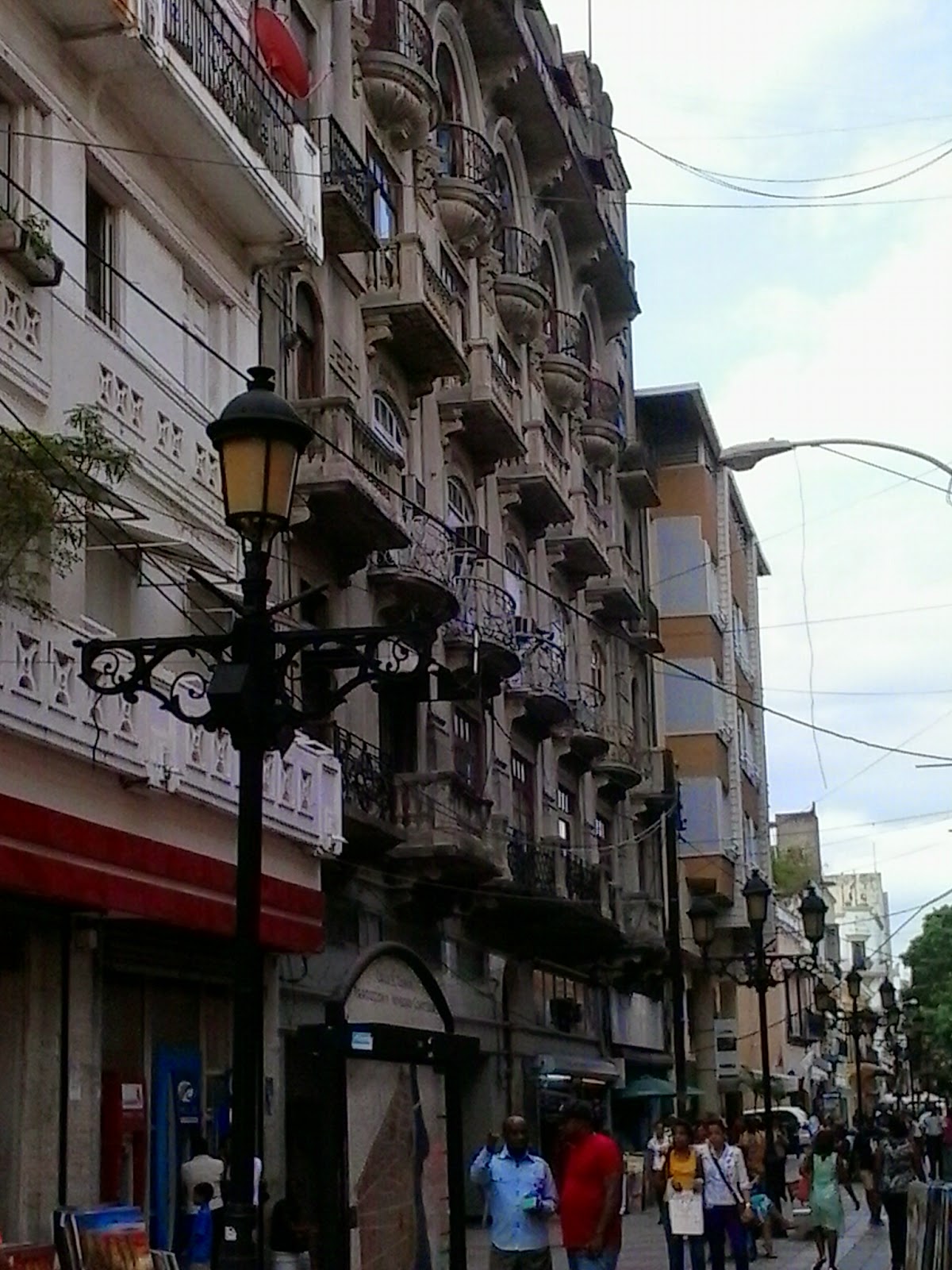 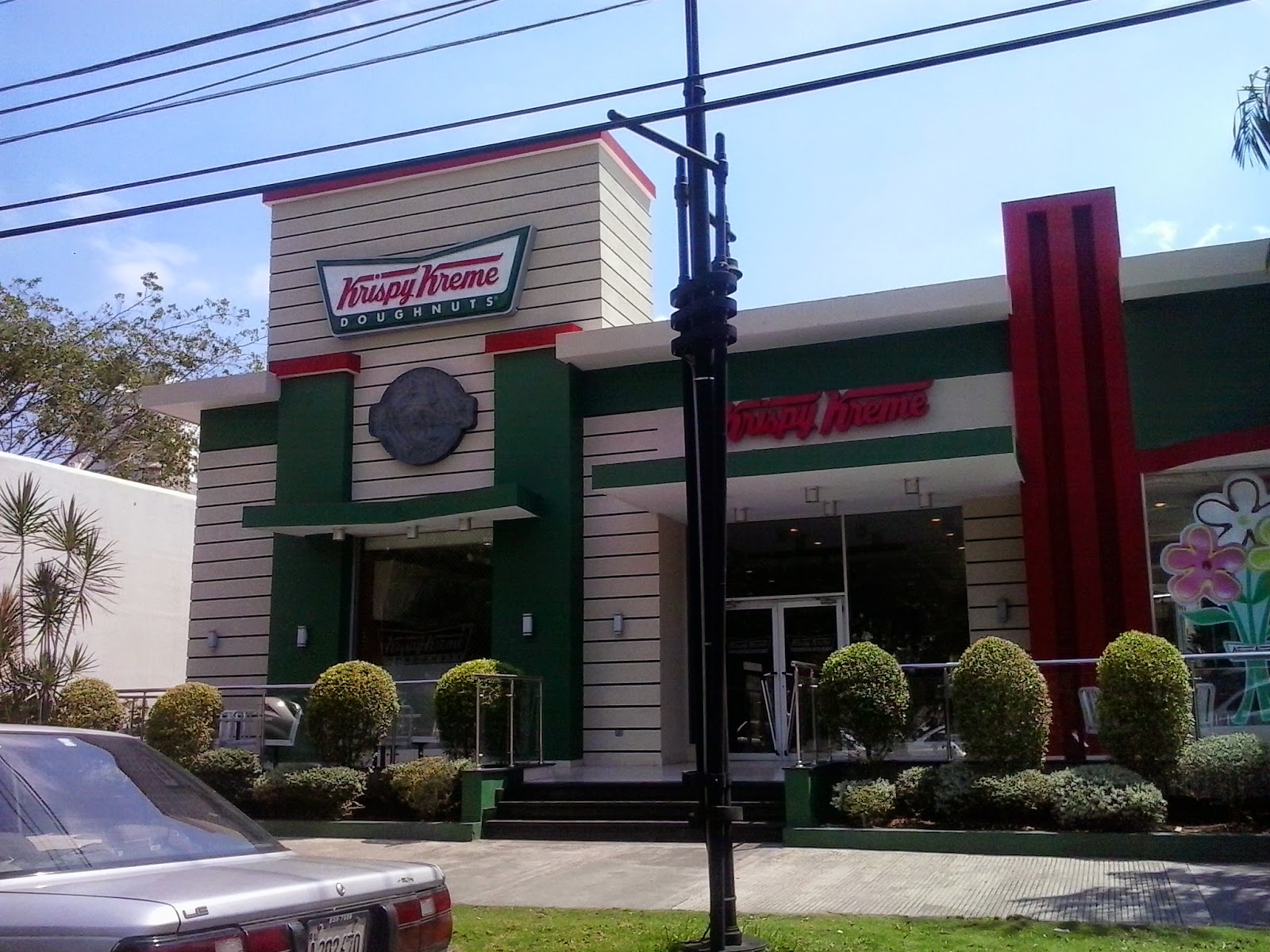 Our day trip ended with smoked chicken dinner and lots of wine at our guide's house in Boca Chica. He did try to get us interested in a $500/mo 3 bedroom apartment in his house about ½ mile from the beach. That included water, power, cable TV, internet and rooftop access for laundry and parties. As the wine flowed, the $500 came all the way down to $350 per month. He did say that $1000 USD per month lets one live like a king here. Hmmmmm.....
Posted by Mike at 4:22 PM No comments:

Il A Vache, An Existential Crisis


We entered the Dominican Republic pessimistically hopeful that it was in better shape. My daughter tells me there are only two categories of countries now, Developing and Developed. There are severe gradients in those two categories. Our DR guide tells us that the Haitians try to cross the mountains, many are shot. He speaks disparaging of Haitians. If I lived there, I would cross the mountain with my family for a better life, as would he.
Posted by Mike at 4:19 PM