After lots of discussion back and forth we are going to bite the bullet and leave the Bahamas heading south.

We spent today in Matthew Town, Great Inagua, the southern-most island in the Bahamas chain. We did some provisioning at the general store, then had lunch at Main House, the Morton Salt company town hotel, then went to customs to clear out of the country.

We also jerry jugged 25 gallons of diesel to top up our tank in prep for the next loooooong legs. The first leg will be 280 miles to the island of ile a vache, a French owned island off the southwest coast of Haiti.  We then go 80 miles upwind to the first port in Dominica Republic.

Speaking of wind, we have been extremely unimpressed with the wind forecasts.  The GRIBs (and Chris Parker) said winds down here would be northerly and then easterly. When we came into Great Inagua yesterday morning we bashed ourselves into 10-12 knots out of the southwest for the last 30 miles!  Today we were supposed to have all easterlies but we are now anchored on a lee shore with 12 out of the west! Sigh.

We just hope tomorrow and Friday turn out to be sailing days with the 15-20 knot winds out of the northeast we have been told to expect. We will see. 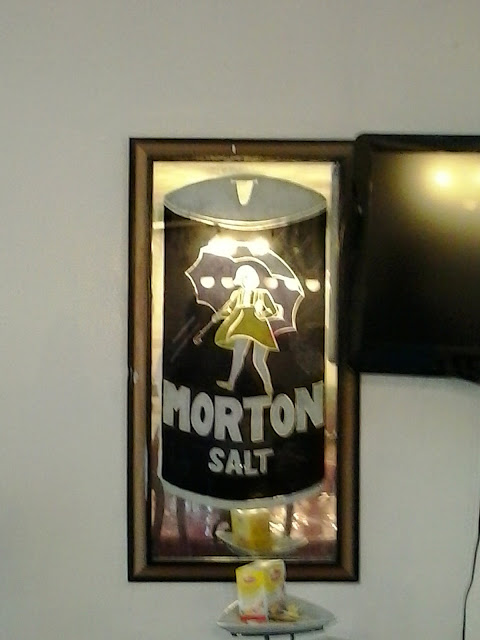 Boats coming to George Town are encouraged to leave boat cards or sign a guest book at Chat n Chill. Karen of Popeye used the names of those vessels to construct this little ditty.  There were a couple names that few could even pronounce, much less fit into a story.

Barefoot and with a Brave Heart he ran Against the Wind to seek his Sol Mate.
“Carpe Diem!” he shouted with his eyes on the Horizon knowing he had a Kindred Spirit out there somewhere. Would it be Audrey Anne? Perhaps Margaret Lee? Or Sam-antha the Skull? Secretly, he hoped it would be Fast Betty. She sounds like a real Spitfire.
With a Silent Faith he Reset his sails trying not to Tilt too much and hoping he was Knot Lost. As the days went by he tried a Pagan Chant hoping to find his Heart’s Desire. At night he’d sip Bristol Crème thinking it was the Cat Sass. Those were Driftin’ Days for this romantic Voyageur.
Final Lee one day with the help of some Local Knowledge he met a Bon Ange – a good angel. She was a fantastic Country Dancer. It was his Dream to Catcher. They met at Rockin’ Ron’s when she rode up on her Borrowed Horse, her Silver Heels flashing in the Fire Light.
“Well, Hello Texas!” he greeted her. “What If we try some Slow Dancing?”
“Why you old Sea Dog!” she cried. “That sounds like a real Good Idea.”
They danced until Tequila Sunrise then he served her a fruit salad with Pineapple, Mango, Tangelo, Cantaloupe and Papaya.
“It’s Just Dessert from yesterday,” he apologized.
“Oh, but it’s Delicia!” she exclaimed.
Calling on his Courage he told her he had one plan: to Live Free or Die.
“I have no Plan B,” he admitted.
“We’re Two of a Kind!” she cried. “Let’s Runaway at High Noon right after I get back from the Five and Dime where I can make a Good Trade – my horse for propane.
Ten Years After they are still in Bliss but Knot Tied. He still has his Charisma and she Ain’t Miss B. Haven too much. They remember the Glory Days of George Town as Kind of Magic and she’s still Raven about his fruit salad.